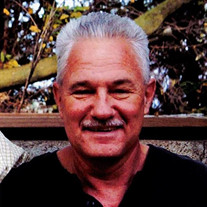 NORFOLK – Funeral service for Gary Allen Weich, 65, of Norfolk will be held at 10:30 a.m., Friday, February 4, 2022 at Christ The Servant Lutheran Church in Norfolk. Rev. Matt Bahnfleth and Rev. Dennis Reich will be officiating the service. Interment will be held at the New Lutheran Cemetery, Norfolk. Visitation will be 4:00-7:00 p.m., Thursday, at the Stonacek Funeral Chapel in Norfolk. Gary passed away on Sunday, January 30, 2022 at the Faith Regional Hospital in Norfolk. Stonacek Funeral Chapel is in charge of the arrangements. Gary was born on June 14, 1956 in Norfolk to DuWayne and Ida (Herzog) Weich. He was baptized and confirmed at the Christ Lutheran Church in Norfolk. He attended grade school in Norfolk and graduated from Norfolk Public High School. He then attended N.E.C.C. and earned his associate’s electrician degree while he worked at Sherwood Medical in Norfolk. He continued working at Sherwood Medical after college. On April 16, 1977, he married Mary Grosserode at the Sacred Heart Catholic Church in Norfolk. Gary worked at Sherwood Medical for 33 years and he enjoyed building computer programs for the robots plus other electrical issues. Gary then began working for Family 1st Dental as a I.T. Coordinator and he loved working with their large staff and dentists. Through the years, Gary touched the lives of many teenagers from all across Iowa, South Dakota, and, Nebraska through T.E.C. (Teens Encounter Christ.) Prior to his T.E.C. involvement, he attended a Cursillo week-end in 1981 in Norfolk which strengthened his love for Christ. He later worked 30 T.E.C. weekends and then Via De Christo weekends in the later years. Gary also taught C.C.D. all during his kids’ junior high and senior high years at Sacred Heart. In 2002, he went on a Mission Trip to Hong Kong and in 2004 he called Christmas Out Reach. Gary was very excited to share the gospel. He was an avid dirt bike rider, riding trial bike, and he loved teaching his grandchildren the proper and safe way to ride dirt bikes. He took several trips to the boundary waters with teenagers through his church. He also enjoyed restoring his 1968 AMX car. Survivors include his wife Mary Weich of Norfolk, son Jared (Sau-Man) Weich of Hong Kong, daughter Bridget (Scott) Lambrecht of Pierce, 7 grandchildren Emily, Grant, Brayden, Raegan, Aaron, Taylor, and Janey, mother Ida Weich of Norfolk, brother Wayne (Linda) Weich of Norfolk, and father-in-law Joe Grosserode of Tilden. He was preceded in death by his father DuWayne Weich, brother Dennis Weich, mother-in-law Sally Grosserode, and brother-in-law Randy Grosserode. Singers will be Dr. Charlie Skoglund, Louise Skoglund, and Susie Lutz. Casket bearers will be Chris Weich, Nick Weich, Tony Grosserode, Anthony Jessen, Micah Bahnfleth, and John Tapper. Honorary casket bearers will be Steve Mussel, Steve Jessen, Brian Anderson, Glen Van Dyke, Aaron Cyboron, Bob Uhing, and Jerry Shaffer. Condolences may be expressed to the family on-line at www.stonacekfuneralchapel.com.

NORFOLK &#8211; Funeral service for Gary Allen Weich, 65, of Norfolk will be held at 10:30 a.m., Friday, February 4, 2022 at Christ The Servant Lutheran Church in Norfolk. Rev. Matt Bahnfleth and Rev. Dennis Reich will be officiating the service.... View Obituary & Service Information

The family of Gary A. Weich created this Life Tributes page to make it easy to share your memories.

Send flowers to the Weich family.