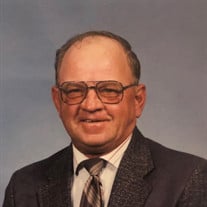 PLAINVIEW -- Public visitation for Gary G. Wragge, 82, of Plainview will be held 4:00-7:00 p.m., Wednesday, September 2, 2020 at the Our Savior Lutheran Church in Plainview. Masks are requested for those attending the visitation. Private family funeral service will be held on Thursday, September 3, with Rev. Donna Fonner officiating. Interment with military rites will be held at the Pleasant View Cemetery, Plainview. Military rites will be conducted by the American Legion Post 148 of Plainview, Nebraska American Legion Riders, and the United States Navy Honors Guard. Gary passed away on Monday, August 31, 2020 at the CHI Health Plainview Hospital. Stonacek Memorial Chapel in Osmond is in charge of the arrangements. Gary Guy Wragge was born on Oct. 8, 1937, in Pierce County to Harry H. and Myrtle C. (Stevens) Wragge. He was baptized on Aug. 7, 1938, and confirmed March 21, 1951, at Christ Lutheran Church in Pierce. He attended rural schools in Pierce County and Pierce High School until January 1955. When he enlisted in the U.S. Navy, he served from Jan. 14, 1955, to Oct. 7, 1958. Gary was very proud of his four years of Navy service and had many stories to tell of his six-month tour aboard U.S.S. Yorktown. He married Marilyn Buss on Nov. 26, 1956, at Yankton. They were parents of three children: Michael Gary, Michelle Sue and Mark David. After his discharge from the Navy, they moved to Plainview, and he worked for his uncle, Elmer Stevens, on the farm. He later worked at the Plainview Creamery, sold 4x4 Feed and operated the mobile grinder for Buss Farm Service. He owned the Corner Café for a year and was service manager at Watson Chevrolet. He then farmed and raised hogs with his sons until suffering a stroke in May, 1996. He was a member of Our Savior Lutheran Church in Plainview. He is survived by his loving spouse of 63 years, Marilyn Wragge; his children, Mike and Lori Wragge, Michelle and Tim Brabec and Mark and Denise Wragge; nine grandchildren, Tim, Kristi, Kari, Danny, Bret, Jay, Cami, David, and Nathan; three step-grandchildren, Joy, Joel and Luke; 18 great-grandchildren, MJ, Britlee, Beau, Bailee, Bradyn, Brody, Collyn, Bailey, Mason, Braylon, Cooper, Everly, Jaxon, Miles, Baker, Lane, Owen and Aiden; five step-great-grandchildren, Maddox, Paxton, Bennett, Quinn and Mason; a sister-in-law, Jeanine Wragge; and many nieces and nephews. He was preceded in death by his parents, Harry and Myrtle, and his brother, Darrell Wragge. Organist will be Jan Krause and soloist will be Jim Krause. Musical selections will be “Here I am Lord,” “Softly and Tenderly,” and recorded hymns “Just As I Am” and “How Great Thou Art.” Casket bearers will be Danny Beal, Bret Beal, Jay Beal, Tim Wragge, David Wragge and Nathan Wragge. Honorary casketbearers will be Kristi Bleach, Kari Erickson, Cami Brabec, Joy Beerbohm, Joel Brabec and Luke Brabec. Condolences may be expressed to the family online at www.stonacekfuneralchapel.com.

PLAINVIEW -- Public visitation for Gary G. Wragge, 82, of Plainview will be held 4:00-7:00 p.m., Wednesday, September 2, 2020 at the Our Savior Lutheran Church in Plainview. Masks are requested for those attending the visitation. Private family... View Obituary & Service Information

The family of Gary G. Wragge created this Life Tributes page to make it easy to share your memories.