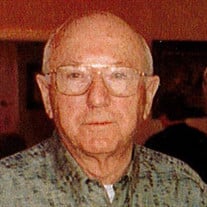 NORFOLK -- Private family memorial service for Gene H. Ebel, 93, of Norfolk will be held on Thursday, April 7, 2022 at the Stonacek Funeral Chapel in Norfolk. Private family inurnment will be held at a later date at the Prospect Hill Cemetery, Norfolk. Military rites will be conducted by the American Legion Post #16, V.F.W. Post #1644, of Norfolk and the United States Army Honors Guard. Gene passed away on Saturday, April 2, 2022 at the Faith Regional Hospital in Norfolk. Stonacek Funeral Chapel is in charge of the arrangements. Gene was born on March 31, 1929, at Scribner, Nebraska to William and Edith (Hall) Ebel. He was baptized and confirmed in the Lutheran Faith. He attended Scribner Public Schools and graduated in 1947. Upon graduation Gene went to work full time for his father in the family-owned trucking business. He worked for him until inducted into the service in 1951. He served in the United States Army and spent 15 months in the Korean War in the 2nd Infantry Division. After discharge Gene and his brother Bill would form a partnership and take over the family trucking business calling it Ebel Transfer. The Ebel brothers purchased and had the first bulk milk pickup truck ever in the State of Nebraska. On April 25, 1954, Gene married Bernita M. Meyer. In 1962 the couple moved to Norfolk where the Nebraska-Iowa Milk Association would build its first ever large milk processing plant. Gene’s first position there was office manager. He was given the directive to get rid of canned milk and have all dairy farmers changed over to bulk milk sale. He was promoted to supervisor of member services, was active in the American Dairy Association of Nebraska, helped to implement the first ever dairy producer check off for advertisement and promotion of milk in Northeast Nebraska. In 1971 he started and implemented the first ever Young Cooperators Program for the Central States Division of Mid-American Dairymen. In 1975 he was transferred to Omaha and was manager of member services for the central states division consisting of Nebraska, Kansas, Iowa, and South Dakota. Later, he was promoted to Director of Operations and a few years later to manager of the Central States Division including the same four state region. He held this position until he retired in May of 1994 and then moved back to Norfolk. Gene was a member of St. John’s Church Norfolk, Scribner Volunteer Fireman, the Elks organization, Scribner Chamber of Commerce, American Legion, Scribner Investor Club, Nebraska Cooperative Extension Association, American Dairy Association of Nebraska. He also served as President of Nebraska Institute of Dairy Technology, received Nebraska Pioneer Farm Award from Aksarben, received the Native Son Award of Scribner, served on the Advisory Committee for the Nebraska Department of Agriculture Bureau of Dairy Foods Division, lifetime member of Midstate’s Milk Haulers Association. He was so proud to be an avid Nebraska Husker season ticket holder during his lifetime. Gene enjoyed golfing, fishing, and hanging out with his coffee friends, but most of all he cherished and loved his family dearly. His smile and love will be forever missed. He is survived by his spouse, Bernita, two daughters, Cinda (Dan) Sanders and Cathy (Tom) Wilke, four grandchildren, Courtney Kenny, Dana (Dan) Nickeson, Chad Wilke and Amy Wilke; along with four great grandchildren who were the light of his life, Collin Kenny, Paisley Schwartz, Riley Wilke, and Davaney Nickeson; one brother Jim (Georgene) Ebel, sister-in-law JoAnn Ebel, and numerous nieces and nephews. Gene was preceded in death by his parents, William and Edith Ebel, two brothers Bill Ebel and Vern Ebel, grandson Ryan Wilke, his father and mother-in-law Alfred and Margaret Meyer. Condolences may be expressed to the family online at www.stonacekfuneralchapel.com.

NORFOLK -- Private family memorial service for Gene H. Ebel, 93, of Norfolk will be held on Thursday, April 7, 2022 at the Stonacek Funeral Chapel in Norfolk. Private family inurnment will be held at a later date at the Prospect Hill Cemetery,... View Obituary & Service Information

The family of Gene H. Ebel created this Life Tributes page to make it easy to share your memories.

Send flowers to the Ebel family.