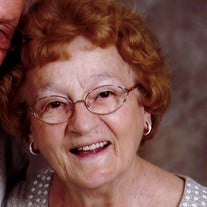 O’NEILL – Celebration of life gathering for Genelle L. Trowbridge, 88, of Norfolk, will be held from 5:00-7:00 p.m., Thursday, October 28, 2021 at the Faith Community Church in O’Neill with a prayer service beginning at 7:00 p.m. Genelle requested that her body be donated to science. No burial is planned. She passed away on Saturday, October 23, 2021 at The Meadows Senior Living in Norfolk. The family requests that memorials be made to the family for a later designation. Stonacek Funeral Chapel in Norfolk is in charge of the arrangements. Genelle Louise (Park) Trowbridge was born June 24, 1933 in Lynch, Nebraska to Rolla and Hazel (Woods) Park. They moved to Neligh briefly and then to Orchard for several years where her mother was a teacher. They moved to Page during Genelle’s high school years, again for her mother’s teaching job. It was there she met the love of her life, Norman Trowbridge. Genelle attended Wayne State College for two years. Then she and Noman were married in June, 1952 before Norman left to serve in the Korean conflict with the Army. During the time he was away, Genelle taught 2nd grade in Plainview. When Norman was discharged in the fall of 1954, they returned to Page and began farming. In 1987, they moved to Norfolk to live and work at a variety of jobs for 12 years. Upon retirement, they moved back to the farm at Page that has been in Norman’s family for 100+ years. In 2014, they moved back to Norfolk for health reasons. Norman passed away in 2014. To this union was born Lori (Marlin) Seevers, Sue Uhing, Timothy (Sue) Trowbridge, Stacy (Andy) Sutton and Natalie (Mike) Haverdink. They were also blessed with seven grandsons: Kent and Eric Seevers, Michael Trowbridge, Alex Sutton, Jared, Noah and Luke Haverdink and three granddaughters: Rachel (Trowbridge) Serrano, Lindsey (Sutton) Yarboro and Paige Uhing and 2 great-granddaughters: Isla Ruth and Ada Claire Seevers. Genelle was a hard-working farm wife. She spent hours in the garden and kitchen growing and preserving vegetables and making her delicious apple pies. She supplemented the family income by substitute teaching, hanging wallpaper for folks and raising chickens. She was a talented seamstress and her love in later years was quilting. She made a quilt for each of her children for a wedding gift and each of her grandchildren when they graduated from high school. Genelle and Norman were active members of Faith Community Church in O’Neill before moving back to Norfolk. Their greatest legacy to their family is pointing them to Jesus and teaching them about the gift of salvation. She was preceded in death by her husband, Norman, her parents, sisters, Beverly and Charlene Ickes, brothers, Bill and Ron Park, and son-in-law, Mike Uhing. She is survived by sisters-in-law, Connie Park, Eleanor Sullivan, Barbara Copple, Judith Summers, Dona Trowbridge and many nieces and nephews. Condolences may be expressed to the family on-line at www.stonacekfuneralchapel.com.

The family of Genelle L. Trowbridge created this Life Tributes page to make it easy to share your memories.

Send flowers to the Trowbridge family.