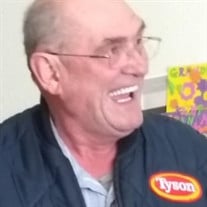 NORFOLK — No services will be held at this time for Gerald W. Ward, 74, of Madison. He died Thursday, Dec. 17, 2020, at Faith Regional Health Services. Stonacek Funeral Chapel in Norfolk was in charge of the arrangements. Gerald W. Ward was born July 17, 1946, in Valentine to Delbert and Phyllis (Farley) Ward. He grew up in Valentine and graduated from Valentine High School in 1964, After graduating from high school, Gerald served his country in the United States Navy from June 5, 1964, to July 14, 1967. After his time with the Navy, he worked as a butcher in Ainsworth. He later moved to Albion as a butcher, after that he moved to Madison in 1974. In Madison he worked at IBP when it first opened until his health went bad causing Gerald to take some time off from work. Once Gerald felt healthy enough he went to work for the City of Madison for a few years. Gerald eventually went back to IBP/Tyson until his retirement. Gerald got his name Grandpa Cookies because when the grandkids used to go over to see him he would have a cookie jar full of cookies for the kids. Then one day his grandkids started to call him Grandpa Cookies. Grandpa loved being around his grandkids and enjoyed having them around. He would go fishing with them whenever he could. Gerald enjoyed being around and talking to his friends and family. Gerald had a routine every day with a two-mile walk along with his coffee at Brady & Amy’s with his friends. Everyone who knew Gerald knew he enjoyed teasing people for their reaction and then he would do his little laugh. In his free time he would work in his garden, feed the birds and watch countless old Westerns. Beyond this, he was an antique collector to anything that caught his eye which also includes old radios and sculptures. Gerald liked to attend auctions and casinos to visit with people. Gerald was really proud to be a Vietnam veteran of the United States Navy, and was really proud that he was on the USS Yorktown when he served. He always had the love for his ships. Survivors include his children, Sharlene Ward of Ainsworth, Sandra Throckmorton of Lincoln, Grace (Nick) Strudl of Columbus and Floyd (Pamela) Ward of Norfolk; 12 grandchildren; five great-grandchildren; brothers Bob Ward and Ken (Kathy) Ward; and many nieces and nephews. He was preceded in death by his parents, Delbert and Phyllis, and brother David. Condolences may be expressed to the family online at www.stonacekfuneralchapel.com.

NORFOLK &#8212; No services will be held at this time for Gerald W. Ward, 74, of Madison. He died Thursday, Dec. 17, 2020, at Faith Regional Health Services. Stonacek Funeral Chapel in Norfolk was in charge of the arrangements. Gerald W. Ward... View Obituary & Service Information

The family of Gerald W. Ward created this Life Tributes page to make it easy to share your memories.

NORFOLK — No services will be held at this time for Gerald W....

Send flowers to the Ward family.