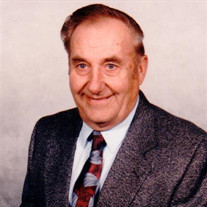 NORFOLK -- Funeral Service for Gilbert J. Vogel, 92, of Norfolk will be held at 10:30 a.m., Saturday, January 12, 2019 at St. Mary's Catholic Church in Norfolk with Father Scott Schilmoeller officiating the service. Burial will be held at Prospect Hill Cemetery in Norfolk. Visitation will be from 4:00 - 7:00 p.m., Friday, at Stonacek Funeral Chapel in Norfolk with the rosary starting at 7:00 p.m. Gilbert passed away on Tuesday, January 8, 2019 at Faith Regional Health Services in Norfolk. Stonacek Funeral Chapel in Norfolk is in charge of the arrangements. Gilbert Joseph Vogel was born Feb. 1, 1926, in rural Colfax County, the son of Joe and Kathryn (Becker) Vogel. Gilbert grew up in rural Howells and attended Sacred Heart Academy at Olean until eighth grade. After grade school, he then started helping his dad on the farm. On Dec. 27, 1951, Gilbert married the love of his life, Marilyn Molacek. They retired from farming and moved to Norfolk in 1993. Gilbert enjoyed shooting pool, horseback riding, farming and living on the family farm, but most of all, he loved his family, whom he cared about very much. He was a member of the Knights of Columbus and of Sacred Heart-St. Mary’s Catholic Parish in Norfolk. Survivors include his spouse, Marilyn Vogel of Norfolk; a son, Dan (Toni) Vogel of Norfolk; a daughter, Mary (John) Kreikemeier of Scribner; his grandchildren, Christy (Tracy) Stout of Hooper, Daniel Kreikemeier of Howells and Kent Vogel of Colorado; his great-grandchildren, Alex, Cailey and Keira; and a sister, Evelyn (Bill) Schulte of Elkhorn. He was preceded in death by his parents, Joe and Kathryn. Casket bearers will be Kent Vogel, Tracy Stout, Joe Molacek, Dan Kreikemeier, Donnie Molacek and Darrel Hegeman. Condolences may be expressed to the family online at www.stonacekfuneralchapel.com.

NORFOLK -- Funeral Service for Gilbert J. Vogel, 92, of Norfolk will be held at 10:30 a.m., Saturday, January 12, 2019 at St. Mary's Catholic Church in Norfolk with Father Scott Schilmoeller officiating the service. Burial will be held at Prospect... View Obituary & Service Information

The family of Gilbert J. Vogel created this Life Tributes page to make it easy to share your memories.

Send flowers to the Vogel family.