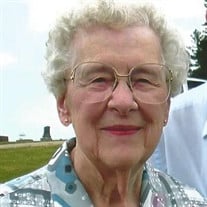 NORFOLK -- Memorial service for Gloria Y. Smith, 87, of Norfolk will be held at 3:00 p.m., Saturday, November 2, 2019 at the Kingdom Hall of Jehovah's Witnesses with Mark Hyatt officiating located at 606 Channel Road in Norfolk. Private family inurnment will be held at a later date at the Hillcrest Memorial Park Cemetery, Norfolk. Gloria passed away Monday, October 28, 2019 at the Heritage of Bel-Air Nursing Home in Norfolk. Stonacek Funeral Chapel in Norfolk is in charge of the arrangements. Gloria was born July 25, 1932 in Randolph, Nebraska to James and Chloe (Griffith) Coulter. She attended grade school at a district country school rural Randolph, and then graduated from Randolph High School in 1950. Gloria married Omar Smith on June 21, 1950 at First United Methodist Church in Randolph, NE. After marriage, Gloria and Omar lived near McLean, NE for one year on a farm. They then moved to a farm east of Randolph for 5 years until moving into Randolph. Gloria worked for the Dairy Dream in Randolph until 1964 when the family moved to Norfolk. Gloria worked at Sherwood Medical in Norfolk for 4 years and then worked at Lee’s Jewelry for several years until she retired. Gloria loved her family very much and spending time with her family. She enjoyed playing the organ, being in the ministry and sharing the good news of God’s Kingdom, vacationing in Branson, MO, her cats, flowers, and she didn’t like to cook but she was a great cook. Gloria was one of Jehovah's Witnesses. Survivors include her spouse Omar Smith of Norfolk, sons Wes (Darla) Smith of O’Neill, Warren (Karyn) Smith of Washington, 9 grandchildren, 8 great-grandchildren. She was preceded in death by daughter Jana Sever in 2010, parents James and Chloe, sisters Blondell Albrecht, Onalie Nordhues, Glyde Hisey, Lois Brummels. Condolences may be expressed to the family on-line at www.stonacekfuneralchapel.com.

The family of Gloria Y. Smith created this Life Tributes page to make it easy to share your memories.

Send flowers to the Smith family.