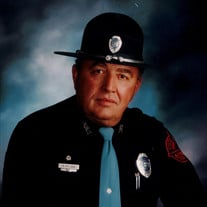 NORFOLK -- Celebration of life for Harold Walter Nielsen (Trooper II), 79, Norfolk, will be at 11:30 a.m. on Saturday, December 4, 2021 at the Stonacek Funeral Chapel, Norfolk. Rev. Lee Weander will be officiating the service. Private family inurnment will be held at a later date at the Park Center Cemetery, Elgin, Nebraska. Visitation will be from 9:00 to 11:30 am, Saturday, preceding the Celebration of Life service. Military rites will be conducted by the American Legion Post #16 and V.F.W. Post #1644, Norfolk, Nebraska, American Legion Riders, United States Air Force Honor Guard, and the Nebraska State Troopers Honor Guard. He died Monday, November 22, 2021 at Faith Regional Hospital, Norfolk, after a lengthy illness. Stonacek Funeral Chapel in Norfolk is in charge of the arrangements. Harold Walter Nielsen was born at home May 21, 1942 to Harold S. and Helen (Bolling) Nielsen at rural Elgin. He attended a small country school (Needmore) south of Neligh from 1st grade to 8th grade. He graduated from Neligh High School in 1958. In 1960 he enlisted in the Air Force, serving in Lackland Air Base, and then in the land of Fire and Ice (Iceland). He served as a refueler there and returned to Clinton Sherman Air Base, Clinton, Oklahoma. He met and married Lorena Lax and they had 2 daughters, Connie Mae and Kellie Ann, born in Oklahoma. They moved to Norfolk, Nebraska in 1964, where Harold joined the Nebraska State Patrol Troop B of Norfolk. Two more daughters, Karen Leigh and Candance Jean, were born here. He and Lorena divorced in late 70s. While on the Nebraska State Patrol, Harold served as a training officer, S.W.A.T. team leader for 15 years, and range officer for 23 years. He drove just shy of one million miles in these surrounding counties until his retirement in 1993. In 1980 he married Carol Schenk in Los Angeles, California. They lived in Norfolk where they started Nielsen Horse Training and later built a training facility in 1990 south of Norfolk. After his retirement from the Nebraska State Patrol he worked for the Battle Creek Police Department. In 2001 he joined the Madison County Sheriff’s office as a deputy and transport officer, transferring and picking up offenders all over the United States for Madison County. He had transported over 9,000 offenders in his career of 17 years. He enjoyed telling stories to his “captive audience”. Harold loved to hunt, target shoot, and show his 2 reining horses, Sam and Mito. He truly loved his family and wished he had spent more time with his 4 lovely daughters and their families. Harold served his country, his state, and his county. He is survived by his wife, Carol, and his four daughters, Connie (Gary) Walkup, Las Vegas; Kellie Ellis, Garland, Tx.; Karen Nielsen, Norfolk, NE., Candi Nielsen, Bonaire, Georgia, 8 grandchildren, 7 great grandchildren, sister Darlene (John) Duprey of Sioux Falls, S.D., brother Edward (Gloria) Nielsen of Norfolk, 4 nieces and nephews. He was preceded in death by his parents and his sister Diane (infant sister who died at a young age.) The family requests that memorials be made to St. Jude’s Children’s Hospital. Condolences may be expressed to the family on-line at www.stonacekfuneralchapel.com.

The family of Harold W. Nielsen created this Life Tributes page to make it easy to share your memories.

Send flowers to the Nielsen family.