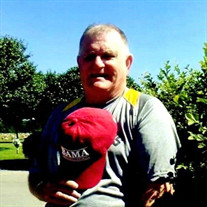 NORFOLK - Public graveside service for Harvey J. Ridgeway, 75, of Norfolk, will be held at 11:00 a.m., Thursday, June 4, 2020 at the Pleasant View Cemetery, Winside with Rev. Randy Rasmussen officiating. Public visitation without the family present will be held 5:00-7:00 p.m., Wednesday at the Stonacek Funeral Chapel in Norfolk. He died Sunday, May 24, at the Omaha VA Medical Center in Omaha, NE. Military rites will be conducted by the United States Navy, American Legion Post 16, V.F.W. Post 1644 of Norfolk. Stonacek Funeral Chapel in Norfolk is in charge of the arrangements. Born July 27, 1944, in Mobile, Ala., he was the son of Harvey and Rosamae (Stickleather) Ridgeway. He graduated from Murphy High School in Mobile in 1963 and the University South Alabama. He served in the U.S. Navy from Aug. 23, 1963, to Aug. 22, 1967 He married Kathy Banzhaf in 1989 in Norfolk. Harvey worked for combined Insurance Company and Vulcraft as a guard in the guard shack. He loved baseball and football. Alabama was his team, “Roll Tide Roll!” Harvey loved spending lots of time with his grandchildren. He enjoyed gambling and was a good ol’ Harvey. Everybody loved him and his smile, full of laughter. Harvey accomplished his bucket list; he made it back to Australia this last summer, as well as went to the National Championship Game to watch his team. He was a member of St. John’s Lutheran Church in Norfolk. Survivors include his spouse, Kathy Ridgeway of Norfolk; three daughters, Charlotte (Chris) Lich of Norfolk, Katie (Vic) Lennon of Australia and Rosemary (Brad) Castledine of Australia; a brother, Rock Ridgeway of Florida; a sister, Ivy Dood of Alabama; nine grandchildren, Sam Ahlers, Zackary Ahlers, Alisyn Lich, Madisyn Lych, Jordan Alderton, Taylah Alderton, Luc Alderton, Brodie Castledine and Amiec Castledine; and many nieces and nephews in Nebraska, Utah, Florida and Alabama. He was preceded in death by his parents, Harvey and Rosamae, and a sister, Sandy Harrison. Music will be provided by Dennis Lewchuck singing “How Great Thou Art,” “Daddy’s Hands” and “Even Though I’m Leaving.” Casketbearers will be Nate Stender, Brian Lich, Sam Ahlers, Dan Butler and Doug Crawford. Honorary casketbearers will be Terry Lich and Zackary Ahlers. Condolences may be expressed to the family online at www.stonacekfuneralchapel.com.

The family of Harvey Joseph Ridgeway created this Life Tributes page to make it easy to share your memories.

Send flowers to the Ridgeway family.