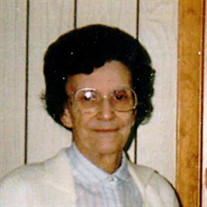 PLAINVIEW -- Private graveside service for Helen Marie (Woolley) Pochop, 98, of Norfolk formerly of Plainview will be held on Wednesday, November 18, 2020 at the Osmond City Cemetery by Rev. Rodgers Chishiba. Helen had requested a graveside service with immediate family. Helen passed away Saturday, November 14, 2020 at the Faith Regional Hospital in Norfolk. Stonacek Memorial Chapel in Osmond is in charge of the arrangements. Helen was born on March 2, 1922 to George William Woolley and Etta Mae (Newhard) Woolley in Osmond, Nebraska. She attended school at the Osmond Public School. She was a member of the Osmond United Methodist Church. Helen married James A. Pochop on October 17, 1942 in Madison, Wisconsin. Jim was serving in the United States Air Force in World War II and was stationed there at that time. During the time her husband served in the military; they also lived in Selma, Alabama and Paris, Texas. When they returned home from the service, they began farming the family Pochop Homestead and were there until 1972 when they built a new home in Plainview, Nebraska. Jim continued to farm until his retirement in 1977. In December 1952, Jim and Helen adopted an infant daughter, Peggy Ann (St. Clair) Pochop, from the Nebraska Children’s Home in Omaha, Nebraska. The family very much enjoyed life on the farm and had many happy memories there and with family and friends. Helen enjoyed hobbies of embroidering, knitting, crossword puzzles and gardening. Helen’s grandchildren and great-grandchildren brought incredible joy to her life and she cherished every moment with them. Helen moved to Norfolk, Nebraska in 1995 to be closer to them and lived in Norfolk until her death on November 14, 2020 at Faith Regional Health Center. Helen is survived by her daughter, Peggy St. Clair-Werlinger, five grandchildren: Justin Miller, Jennifer (Arsenio) Miller, Jill (John Bear) Miller, Deena (Joshua) Green and Michael (Amanda Craven) Werlinger, six great-grandchildren: Nicole, Dylan, Zane, Gavin, Vincent and Dominic. She is, also, survived by a host of nieces and nephews, very dear friends, Ed and Linda Peterson and Arnold and Jeanne Oltjenbruns. Helen was preceded in death by her parents, her husband, infant daughter, Bonnie Marie, one brother, Leonard Woolley, two sisters, Odessa Halleen and Dorothy Jewell, as well as, several nieces and nephews. Condolences may be expressed to the family on-line at www.stonacekfuneralchapel.com.

The family of Helen M. Pochop created this Life Tributes page to make it easy to share your memories.

Send flowers to the Pochop family.