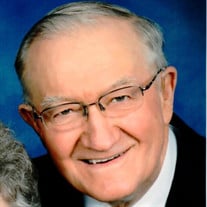 NORFOLK -- Funeral service for Henry A. Meyer, 89, of Norfolk will be held at 10:30 a.m., Tuesday, October 20, 2020 at the Christ Lutheran Church in Norfolk with Rev. Dave Goehman officiating. Interment will be at the Christ Lutheran Cemetery in Bazile Mills, rural Creighton. Visitation will be 4:00-7:00 p.m., Monday at the Stonacek Funeral Chapel in Norfolk and 1 hour prior to the service on Tuesday at the church. The service will be live streamed on the Stonacek Funeral Chapel Facebook Page. Henry passed away in Norfolk on Friday, October 16, 2020. Military rites will be conducted by the American Legion Post 74, V.F.W. Post 1151, of Creighton, and the United States Army Honors Guard. Stonacek Funeral Chapel in Norfolk is in charge of the arrangements. Henry A. Meyer was born on December 30, 1930 in Humphrey, to Herman and Etta (Sjuts) Meyer. He and his family belonged to St. Peter Lutheran Church in Humphrey where Henry was baptized on January 11, 1931. He was raised in Humphrey where he also attended Humphrey country grade school. On June 10, 1945 Henry was confirmed in the Lutheran faith at St. Peter Lutheran Church in Humphrey where his confirmation verse was Revelation 3:11 which read “Hold on to what you have, so that no one will take your crown.” After junior high, Henry went on to receive his GED, along with some college education. On March 17, 1953 he joined the United States Army where he serviced his country for the next couple years before being honorably discharged on March 16, 1955. Shortly after his time in the military Henry married the love of his life, Velda Kremeier, on December 18, 1955 at the Christ Lutheran Church in Creighton, NE. The couple later moved to Hadar, NE. where they farmed. To this union were born 11 children. Henry received a Public Service Award from the United States Weather Bureau on July 3, 1962 for reporting a tornado warning to the town of Tilden, NE. The town was dealt a devastating blow from the storm. In June of 1987 Henry got a job working for the Post Office, where he held a position for over ten years before retiring from the Post Office in March of 1998. Henry was a devote Christian and man of God, his faith took him to be an avid member of Lutheran Churches throughout his life belonging to St. Peter's Lutheran Church, Humphrey, Zion Lutheran Church, Leigh, Zion Lutheran Church, Pierce, and Christ Lutheran Church in Norfolk. Henry worked as a laborer for Christ building additions onto churches. He was also a Lutheran Layman member. On April 8, 2009, Henry was recognized as an outstanding volunteer for Faith Regional Hospice Care. He was an amazing husband, father, grandfather, great grandfather, and friend. He particularly enjoyed farming, hunting, fishing, playing baseball, and most of all spending time with his children, grandchildren, and great grandchildren. Survivors include his wife Velda Meyer of Hadar, children Rev. Glenn (Sue) Meyer of Bennington, Debbie (Berwyn) Rector of Arlington, Sheri Leising of Arapahoe, Susan (Dan) Harstad of Norfolk, Sandy (Rev. John) Gutz of Streator, IL., Melanie (Roger) Ernst of Springfield, NE, Lori (Dr. Jeff) Schutt of Yorkville, IL., Mary (Chad) South of Richmond, VA. David (Jeannette) Meyer of Kentwood, MI., Michelle (Brian) Coffman of Papillion, NE., Mark (Leanna) Meyer of Lincoln, NE., 32 grandchildren, 19 great grandchildren, and brother Gerald (Jan) Meyer of Humphrey. He was preceded in death by his parents Herman and Etta, brother Arlyn Meyer, son-in-law Walt Leising, and nephew Larry Meyer. Casket bearers include Henry's grandsons Tim Meyer, Jeremy Rector, Jonathan Rector, Nathan Leising, Bryce Leising Ben Gutz, Thomas Ernst, Chris Ernst, Kyle Ernst, CJ Schutt, Jacob Schutt, Colton Schutt, Jaden Schutt, Peyton South, Brook South, Gabriel Meyer, and Joshua Meyer. Memorials may be made to the Lutheran Hour, Mission Central, Nebraska Concordia University-Seward, or Lutheran High Northeast. Condolences may be expressed to the family on-line at www.stonacekfuneralchapel.com.

The family of Henry A. Meyer created this Life Tributes page to make it easy to share your memories.

Send flowers to the Meyer family.