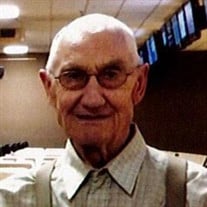 NORFOLK – Funeral service for Howard W. Degener, 95, of Norfolk will be held at 10:30 a.m., Friday, August 20, 2021 at the St. Mary’s Catholic Church in Norfolk. Father Gregory Carl will be officiating the service. Interment will be held at the Hillcrest Memorial Park Cemetery, Norfolk. Visitation will be 5:00-7:00 p.m., Thursday, at the Stonacek Funeral Chapel with the rosary service beginning at 7:00 p.m. Howard passed away on Saturday, August 14, 2021 at the Faith Regional Hospital in Norfolk. Stonacek Funeral Chapel is in charge of the arrangements. Howard W. Degener, son of Wilhelm and Minnie (Baslington) Degener, was born Jan. 11, 1926, in Pine Island Township, Minn. He graduated from high school in Zumbrota, Minn., and then farmed with his family on the family farm. He met Marcelline in June 1969, and they were married Sept. 13, 1969. After their marriage, Marcelline and Howard lived in St. Louis Park, Minn., where Howard worked construction as a tar roofer. In 1989, they moved to Norfolk, where Marcelline and Howard had a vending business of small candy machines that covered a 75-mile radius around Norfolk. He enjoyed traveling with Marcelline during the winter months, gardening, working outdoors and tending to his lawn. He was a member of Sacred Heart Parish in Norfolk. Survivors include sons Dale Degener of Rochester, Minn., Maurice (Mary) Degener of Irvine, Calif., and Lee (Diane) Dagen of Houston, Texas; daughter Nancy Boucher of Salt Lake City, Utah; 13 grandchildren and eight great-grandchildren. He was preceded in death by his spouse, Marcelline in 2017; son Steven Degener; parents Wilhelm and Minnie; and sisters Vera, Frieda and Doris. Music will be provided by organist Mary Bruckner and the Bound For Glory choir. Condolences may be expressed to the family online at www.stonacekfuneralchapel.com.

The family of Howard W. Degener created this Life Tributes page to make it easy to share your memories.

Send flowers to the Degener family.