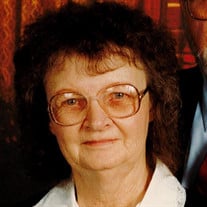 STANTON -- Funeral service for Ina P. Gemelke, 89, of Stanton, will be held at 11:00 a.m., Thursday, December 30, 2021 at the Stonacek Funeral Chapel in Norfolk. Rev. Bridget Gately will be officiating. Interment will be held at the Stanton Cemetery. Visitation will be 5:00-7:00 p.m., Wednesday, December 29, also at the Stonacek Funeral Chapel in Norfolk. Ina passed away on Friday, December 24, 2021 at the St. Joseph's Rehabilitation and Care Center in Norfolk with her family by her side. Stonacek Funeral Chapel in Norfolk is in charge of the arrangements. Ina was born on March 25, 1932 to Albert and Eva (Frank) Smith in rural Stanton, Nebraska. She attended grade school in Stanton and Stanton High School. She married Wilbur D. Gemelke on Dec. 22, 1951, at the United Methodist Parsonage in Stanton. The couple worked at the Norfolk Regional Center, and she was employed as a psychiatric technician II from 1957 until she retired in 1992. Ina and her husband worked the same schedule and shift at the Norfolk Regional Center until the day that they both retired from there. Ina enjoyed spending time and doing things with her family. Her family was her whole world. She enjoyed word search puzzles, bingo, Yahtzee, baking and cooking for her family and friends and Sunday afternoon drives through the country. When her girls were young, she often made them paper dolls. She was a member of the United Methodist Church, Stanton, Faith Circle United Methodist Women, Stanton V.F.W. Auxiliary 3602, and Friends of the Stanton Public Library. Ina is survived by her two daughters, Laura and Terry Hess of Stanton, Cindy Retzlaff of Manhattan, Kan.; five grandchildren, Keri (Dan) Smith of Lincoln, Kory (Robyn) Hess of Norfolk, Kody (Brooke) Hess of Lincoln and Jeremy DeWitt of Norfolk and Justin DeWitt of Stanton; 12 great-grandchildren, Cadence and Nicole Hess, Haley, Maya, Kaleb, and Adrian Hess, Jaid and Joe DeWitt, Timothy DeWitt, Paige DeWitt, Elijah DeWitt, and Allison Montigue. She was preceded in death by her husband Wilbur Gemelke on August 20, 2015, son-in-law Walter Retzlaff, parents Albert Smith and Eva Mewis, brothers Merlin Smith, Allen Smith, sisters Helen Wassenaar, and Elsie Cox. Condolences may be expressed to the family on-line at www.stonacekfuneralchapel.com.

STANTON -- Funeral service for Ina P. Gemelke, 89, of Stanton, will be held at 11:00 a.m., Thursday, December 30, 2021 at the Stonacek Funeral Chapel in Norfolk. Rev. Bridget Gately will be officiating. Interment will be held at the Stanton... View Obituary & Service Information

The family of Ina P. Gemelke created this Life Tributes page to make it easy to share your memories.

Send flowers to the Gemelke family.