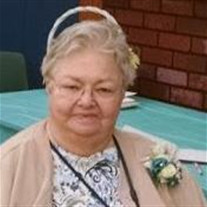 NORFOLK -- Funeral service for Irene A. Marks, 86, of Norfolk will be held at 10:30 a.m., Monday, October 28, 2019 at the Christ Lutheran Church in Norfolk with Rev. David Goehmann officiating. Interment will be at the Hillcrest Memorial Park Cemetery in Norfolk. Visitation will be 6:00-8:00 p.m., Sunday, Oct. 27, also at the Christ Lutheran Church in Norfolk. Irene passed away surrounded her family on Thursday, October 24, 2019 at the Faith Regional Hospital in Norfolk. Stonacek Funeral Chapel in Norfolk is in charge of the arrangements. Irene was born March 5, 1933 in Osmond to Henery and Martha (Hoestje) Kuhl. She attended grade school and high school in Osmond. Irene was baptized on May 14, 1933 at the Immanuel Lutheran Church in Osmond and confirmed on June 5, 1949 at the Immanuel Lutheran Church in Plainview. Irene was a member at Christ Lutheran Church in Norfolk where she was active throughout her life in various church groups and activities. After her education, Irene grew up in rural Osmond and lived in Pierce County while working for the Osmond Hospital. She later moved to Norfolk and worked for Henningsen Foods in Norfolk. Irene married Duane Marks on March 22, 1956 at the Immanuel Lutheran Church in Plainview, NE. After marriage, the couple continued living in Norfolk and Irene worked at the Norfolk Sale Barn which she worked there until the kitchen closed. Irene then worked for Dales Electronics in Norfolk for 15 years until she retired. Irene enjoyed cross stitching, bingo, crossword puzzles, playing cards with family and friends, and dancing. Irene was proud to have won a trip to Hawaii through Hy-vee that she enjoyed with her husband Duane. Survivors include her spouse Duane Marks of Norfolk, children Nyla Pedrosa (friend Gary Fletcher) of Lincoln, Cindy (Terry) Rasmussen of Norfolk, Tammy (Ron) Stender of Norfolk, Tom (Vicki) Marks of Norfolk, Lee (Betty) Marks of David City, Lisa (Chris) Kallhoff of Yankton, SD, son-in-law David Meinke of Norfolk, 16 grandchildren, 36 great-grandchildren, 1 great-great-grandchild, sister Marjorie Dalton of Norfolk Irene was preceded in death by her parents Henery and Martha, daughter Susan Meinke, and three sisters Betty Kuhl, Linda Kuhl, and Helen Kuhl. Casket bearers will be Jeff Meinke, Jason Meinke, Chris Coulter, Justin Pedrosa, Josh Rasmussen, Jake Rasmussen, Nate Stender, Landon Stender, Aaron Marks, Logan Kallhoff, and Shannon Marks. Honorary casket bearers will be Miranda Lindstrom, Jodi Treat, McKenzie Kallhoff, Jadie Grashorn, Monica Marks, and Mandy Sloan. Condolences may be expressed to the family on-line at www.stonacekfuneralchapel.com.

NORFOLK -- Funeral service for Irene A. Marks, 86, of Norfolk will be held at 10:30 a.m., Monday, October 28, 2019 at the Christ Lutheran Church in Norfolk with Rev. David Goehmann officiating. Interment will be at the Hillcrest Memorial Park... View Obituary & Service Information

The family of Irene A. Marks created this Life Tributes page to make it easy to share your memories.

Send flowers to the Marks family.