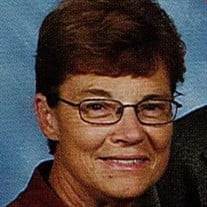 PIERCE — Funeral service for Janet D. Lambrecht, 70, Pierce, will be at 1:30 p.m. Tuesday, May 11, 2021 at the Zion Lutheran Church in Pierce. Burial will be in Prospect View Cemetery in rural Pierce. Visitation will be 4-7:00 p.m., Monday, at the Stonacek Memorial Chapel in Pierce. She passed away on Thursday, May 6, 2021, at Faith Regional Health Services in Norfolk. Stonacek Memorial Chapel in Pierce is in charge of the arrangements. Janet Lambrecht, the daughter of Elmer and Verna (Dederman) Droescher, was born Aug. 16, 1950, in Norfolk. She was baptized on Sept. 3, 1950, and confirmed on May 7, 1964, at Immanuel Lutheran Church in Hadar. She attended Hadar country school and Immanuel Lutheran Parochial School in Hadar before graduating from Pierce High School in 1968. She married Doug Lambrecht on Aug. 23, 1970, at Immanuel Lutheran Church in Hadar. After marriage, the couple lived northwest of Pierce and farmed. Jan enjoyed going to her children’s and grandchildren’s activities over the years, community and school events, dances and playing cards. She was a member of Zion Lutheran Church in Pierce, its ladies aid and the Zion Choir. She served as a Sunday school teacher and was a member of the Pierce Jaycees. Survivors include her spouse, Doug Lambrecht of Pierce; her children, Scott (Bridget) Lambrecht of Pierce and Sheri Lambrecht of Norfolk; her grandchildren, Emily, Grant, Brayden, Raegan and Taylor; a sister, Jolen (Thomas) Krueger of Watertown, S.D.; and a sister-in-law, Marcella Droescher of Orlando, Fla. She was preceded in death by her parents, Elmer and Verna; her brothers, Lyle and Dallas; a sister-in-law, Jalene; and two nephews, Robbie Droescher and Jody Droescher. Organist will be Dottie Ahlers playing congregational hymns “I’m But A Stranger Here,” “How Great Thou Art” and “On Eagle’s Wings.” The recorded hymn will be “Ten Thousand Angels.” Casketbearers will be Rusty Droescher, Dave Droescher, Dale Droescher, Andrew Krueger, Jeff Lambrecht, Adam Lambrecht and Troy Lambrecht. Honorary casketbearers will be her grandchildren: Emily, Grant, Brayden, Raegan and Taylor. Condolences may be expressed to the family online at www.stonacekfuneralchapel.com.

The family of Janet D. Lambrecht created this Life Tributes page to make it easy to share your memories.

Send flowers to the Lambrecht family.