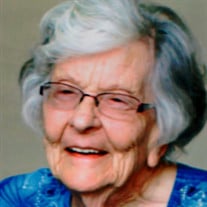 NORFOLK -- Funeral service for Janice M. Luttman, 93, of Norfolk, will be held at 10:30 a.m., Thursday, August 29, 2019 at the Community Bible Church in Norfolk with Pastor Arin Hess officiating. Interment will be at the Osmond City Cemetery, rural Osmond. Visitation will begin at 9:00 a.m., Thursday prior to the service also at the church. Janice died on Friday, August 23, 2019 at The Ambassador Assisted Living in Nebraska City. Stonacek Funeral Chapel in Norfolk is in charge of the arrangements. Janice M. Luttman, the daughter of Ed and Minnie (Bogenhagen) Weingartner, was born Dec. 4, 1925, in Osmond. She attended elementary at Osmond Public School, graduated from Osmond High School in 1943 and then attended Wayne State College She married Byrl Luttman Jr. on Oct. 29, 1945, at First Presbyterian Church in Osmond. She lived her entire life in Nebraska, including in the communities of Newman Grove, Tilden, Osmond, Madison and Norfolk. Janice was a teacher in rural Madison County, teaching kindergarten through eighth grade and teaching kindergarten in the Osmond Public Schools. She enjoyed gardening, reading, needle work and bird watching. She was a member of Community Bible Church in Norfolk. Survivors include a daughter, Pamela (Gary) Rademacher of Nebraska City; a son-in-law, Ronald Deermer of Huntsville, Ala.; eight grandchildren, John Deermer of Baltimore, Md., David Deermer of Huntsville, Jennifer Deermer of Huntsville, Mary Stoner of Geneva, Ann Bender of Lincoln, Beth Reiners of Hastings, Adam Rademacher of Lincoln and Kevin Rademacher of Omaha; 16 great-grandchildren; nieces and nephews; and grand-nieces and -nephews. She was preceded in death by her spouse, Byrl Luttman Jr. in 1982; a daughter, Patricia Deermer in 2015; and granddaughter Deborah Deermer in 1980. She was the last member of her immediate family, having been preceded in death by her father, mother, two brothers and four sisters. Music will be provided by Anne Marie Hess playing congregational hymns “I Know Who Holds Tomorrow,” “How Great Thou Art” and “Holy, Holy, Holy.” Casketbearers will be John Deermer, David Deermer, Adam Rademacher, Kevin Rademacher, Travis Stoner and Dwight Bender. Memorials can be designated to Community Bible Church, 401 E. Park Ave, Norfolk, NE 68701. Condolences may be expressed to the family online at www.stonacekfuneralchapel.com.

NORFOLK -- Funeral service for Janice M. Luttman, 93, of Norfolk, will be held at 10:30 a.m., Thursday, August 29, 2019 at the Community Bible Church in Norfolk with Pastor Arin Hess officiating. Interment will be at the Osmond City Cemetery,... View Obituary & Service Information

The family of Janice M. Luttman created this Life Tributes page to make it easy to share your memories.

Send flowers to the Luttman family.