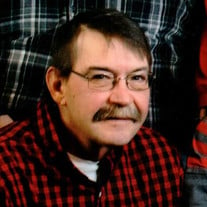 BATTLE CREEK -- Memorial service for Jeffrey H. "Jeff" Christiansen, 62, of Battle Creek will be held at 10:30 a.m., Friday, December 20, 2019 at the Stonacek Funeral Chapel in Norfolk with Pastor Mike Moreno officiating. Inurnment will be a private family service at a later date. Visitation will be 4:00-7:00 p.m., Thursday, also at the Stonacek Funeral Chapel in Norfolk. Jeff passed away Sunday, December 15, 2019 at his residence, rural Battle Creek. Stonacek Funeral Chapel in Norfolk is in charge of the arrangements. Born Feb. 27, 1957, in Sioux Rapids, Iowa, Jeff was the son of Elwood and June (Donaldson) Christiansen. He graduated from Marathon High School in 1976 in Iowa. After high school, Jeff worked at a beef plant in Denison, Iowa, which is where he would eventually meet, Connie Coenen, whom he married on March 26, 1983, in Defiance, Iowa. Jeff and Connie continued to live in Iowa. They later moved to Norfolk in 1987, and Jeff worked for Beef America until it closed. He then began working for the City of Norfolk in 1999 and currently was working in the street division. He also did the maintenance work for Norfolk Regional Airport. Jeff enjoyed hunting, fishing, trapping, raising his hunting dogs and especially spending time with his family and grandchildren. Survivors include his spouse, Connie Christiansen of Battle Creek; his sons, Matt (Kaye) Christiansen of Pierce and Andrew (Alison) Christiansen of Norfolk; two grandsons, Barrett and Baylor; his mother, June Christiansen of Colorado; and a brother, Mike (LeAnn) Christiansen of Colorado. He was preceded in death by his father, Elwood, and a brother, Gene. Condolences may be expressed to the family at www.stonacekfuneralchapel.com.

BATTLE CREEK -- Memorial service for Jeffrey H. "Jeff" Christiansen, 62, of Battle Creek will be held at 10:30 a.m., Friday, December 20, 2019 at the Stonacek Funeral Chapel in Norfolk with Pastor Mike Moreno officiating. Inurnment will be a... View Obituary & Service Information

The family of Jeffrey H. "Jeff" Christiansen created this Life Tributes page to make it easy to share your memories.

Send flowers to the Christiansen family.