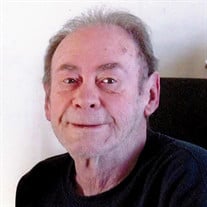 NORFOLK -- Memorial visitation for Jerald L. Brenden, 74, of Norfolk will be held from 1:00 - 3:00 p.m., Saturday, January 22, 2022 at the Stonacek Funeral Chapel in Norfolk. There is no burial planned at this time. Jerald passed away with his family by his side on Wednesday, January 5, 2022 at his residence in Norfolk. Stonacek Funeral Chapel is in charge of the arrangements. Jerald L. Brenden was born on February 19, 1947 to Leo and Violet (Ladwig) Brenden in Vienna, South Dakota. Jerald graduated from Bryant High School, South Dakota in 1965. He later attended and graduated from a business college in Watertown, South Dakota. After graduating from college Jerald moved to California and worked at a bank for 1.5 years. Jerald married Barbara Schwanke on July 11, 1968 in San Jose, CA. After marriage, Jerald and Barbara moved to Norfolk in September of 1969. He worked for Heckman Top and Body for 16 years as parts department. He then later worked as a counter man until he retired in 1992. He collected coins, enjoyed fishing, camping, family gatherings, and he loved watching his grandchildren’s events. Jerald’s most favorite thing was umpiring and coaching his boys for 25 years. Survivors include spouse Barbara Brenden of Norfolk, children Tricia (Barry) Brown of Norfolk, Tracy (Patt) Ruitenberg of Norfolk, Jerald (Angie) Brenden of Norfolk, 4 grandchildren Elizabeth (Lizzy) Ruitenberg, Stephan Ruitenberg, Rebecca Brenden, Dustin Brenden, siblings Anita Gnat of Pierce, Marilyn (Mike) Ray of San Jose, CA, Darwin Brenden of Cedar Falls, IA, Carolyn (Bill) Schellen of Stanton, Kristi (Darren) Garber of Pierce, Corey (Kyle) Stormo of Stanton, Kyle (Barb) Brenden of Beatrice, and many nieces and nephews. Jerald was Preceded in death by parents Leo and Violet, sister-in-law Carol Brenden, Ronald Gnat, brother-in-law, and great granddaughter Svannah Ruitenberg. Condolences may be expressed to the family on-line at www.stonacekfuneralchapel.com.

NORFOLK -- Memorial visitation for Jerald L. Brenden, 74, of Norfolk will be held from 1:00 - 3:00 p.m., Saturday, January 22, 2022 at the Stonacek Funeral Chapel in Norfolk. There is no burial planned at this time. Jerald passed away with his... View Obituary & Service Information

The family of Jerald L. Brenden created this Life Tributes page to make it easy to share your memories.

Send flowers to the Brenden family.