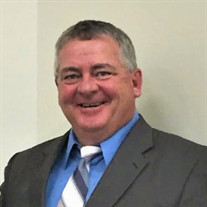 HOSKINS – Memorial service for Jerry L. Caldwell, 56, Hoskins, will be Monday, February 21 at 10:30 a.m. at United Methodist Church in Bassett. Pastor Dennis Quigley will officiate the service. Visitation will be Sunday evening, 2-4:00 p.m., at the church in Bassett. Burial of cremains will be at Bassett Memorial Park Cemetery. Hoch Funeral Home in Bassett is in charge of the service arrangements. Stonacek Funeral Chapel in Norfolk is in charge of the local arrangements. Jerry passed away, with his family and friends by his side, Saturday, Feb. 12, 2022, at his residence in Hoskins after a hard-fought battle with cancer. Jerry Lee Caldwell was born on Nov. 21, 1965, in Vernal, Utah, to Kerry and Kenna (Ebert) Caldwell. He attended Rock County Schools in Bassett, and graduated from Rock County High School. After high school, Jerry worked in Norfolk for a short time, before moving to Raleigh, North Carolina. He married Jody Stewart in 1988, and they had one son, Taylor, who was born in 1990. In North Carolina, he worked in construction and framing houses. He then moved back to Norfolk, and for a short time worked in the oil industry with his father. Jerry became an entrepreneur and purchased a bar in Stanton, and later started trucking companies L & J Express and TC Transport in Stanton. Jody and Jerry were later divorced, but continued to be business partners. He then built a beautiful home with his girlfriend, BreAnn Erbst, in Hoskins, and moved there in 2015. He enjoyed snowmobiling in the Black Hills, Wyoming and Colorado; camping; golfing and socializing. He became a racing fanatic after putting his son in a go cart at the age of 10, and big class cars at Riviera Raceway near Norfolk at the age of 14. He enjoyed attending racing events with friends, especially big events at Knoxville (Iowa) and Silver Dollar Nationals at I-80. Survivors include his girlfriend, BreAnn Erbst of Hoskins; sons, Taylor (Bailey) Caldwell and son Clyde of Omaha, Nicholas Sonnenfelt and children Ali and Michael of Norfolk, and Billy Kienke of Loup City; father, Kerry (Alice) Caldwell of Mountain View, Wyo.; stepfather, Larry Ebert of Bassett; siblings Susan (Robert) Colombo of Petaluma, Calif., Vince (RaeDean) Caldwell of Newport, Jeremy (Karen) Caldwell of Cheyenne, Wyo., Eric (Brandi) Caldwell of North Ogden, Utah, Laurie (Lee) Irish, Larry (Nicole) Ebert II and Sam (Linda) Coulter all of Bassett; many nieces and nephews and great nieces and nephews; friend, Jody Stewart of Norfolk; honorary brothers Mike Luna, Kip Koenig, Matt Behmer, Charlie Robertson, Scott Krentz, Brett Schmitz, Bill Coates, Mark Croghan, Nic McCarthy, Karry Neisius, Travis Theis, Andrew (Otis) Doffin, Lee Doffin and Justin Kesting. He was preceded in death by his mother, Kenna Ebert; and his maternal and paternal grandparents, heavenly honorary brothers, Brian Nordby, Kevin Stahl and Cory Skrivanek. Condolences may be expressed to the family on-line at www.stonacekfuneralchapel.com.

The family of Jerry L. Caldwell created this Life Tributes page to make it easy to share your memories.

Send flowers to the Caldwell family.