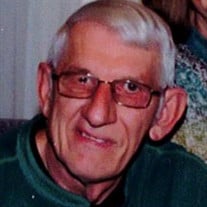 NORFOLK -- Memorial service for Jerry L. Kudera, 77, of Norfolk will be held at 11:00 a.m., Saturday, January 15, 2022 at Stonacek Funeral Chapel, Norfolk. Rev. Robert Wiest will be officiating the service. There is no burial planned at this time. Visitation will take place one hour prior to service time on Saturday. Jerry passed away peacefully at his home in Norfolk on January 10, 2022. Stonacek Funeral Chapel is in charge of the arrangements. Jerry L. Kudera was born on February 26, 1944 to Leonard and Bernice (Mathine) Kudera in McCook, Nebraska. Jerry attended grade school in Plainview and graduated from Plainview High School in 1963, he then attended Universal Trade School in 1964. After Jerry’s education, he began working in 1966 for the Norfolk Daily News for 9 years. Jerry married Ann Huebner on November 11, 1967, at Mount Olive Lutheran Church in Norfolk. After working for the Norfolk paper, Jerry then began working for the City of Norfolk in the water department as a service man for 35 years, retiring in 2009. Once retired Jerry and Ann started traveling, taking bus tours, and he enjoyed attending his grandson’s sporting events. Jerry also enjoyed watching the Lakers, Rams, Cardinals, and the Cornhuskers. Jerry was a member of Mt. Olive Lutheran Church in Norfolk. Survivors include spouse Ann Kudera of Norfolk, two daughters Kristi (Duane) Buresh of Raymond, Karla (Dan) Uhing of Bow Valley, two grandsons Kash (Kelsey) Buresh of Yutan, Dane Buresh and fiancée Amanda of Lincoln, two great-granddaughters Laikyn and Conley Buresh of Yutan, brother Ron Kudera of Plainview, sister Mary (Ken) Huntley of Columbus, and sister Marilyn Kudera of Cedar Bluffs. Jerry was preceded in death by parents Leonard and Bernice and brother Dennis Kudera. In lieu of flowers, memorials can be sent to Norfolk YMCA Rock-Steady Boxing. Condolences may be expressed to the family on-line at www.stonacekfuneralchapel.com.

NORFOLK -- Memorial service for Jerry L. Kudera, 77, of Norfolk will be held at 11:00 a.m., Saturday, January 15, 2022 at Stonacek Funeral Chapel, Norfolk. Rev. Robert Wiest will be officiating the service. There is no burial planned at this... View Obituary & Service Information

The family of Jerry L. Kudera created this Life Tributes page to make it easy to share your memories.

Send flowers to the Kudera family.