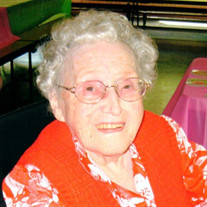 PIERCE -- Funeral service for Jessie A. Synovec, 92, of Pierce will be held at 2:00 p.m., Monday, June 3, 2019 at the United Church of Christ in Pierce with Rev. Terry Buol officiating the service. Interment will be at the Prospect View Cemetery, Pierce. Visitation will be 4:00-7:00 p.m., Sunday at the Stonacek Memorial Chapel in Pierce. Mrs. Synovec died Thursday, May 30, 2019 at the Norfolk Care and Rehab Center in Norfolk. Stonacek Memorial Chapel in Pierce is in charge of the arrangements. She was born on June 17, 1926, at Elsmere, Neb., the daughter of Charles E. and Alta M. (Losh) Good. She attended grade school at the Johnstown Public School until May 15, 1940. She then attended Johnstown High School and graduated on May 18, 1944. She married Alvin A. Synovec on Dec. 3, 1949, at the First Congregational Church in Fremont. After high school, Jessie taught grade school at Johnstown and also at county school, rural Ainsworth. She then went to work for the Ainsworth phone company as a switch board operator. She was later transferred to the phone company in Norfolk. Jessie met Alvin Synovec at the Kings Ballroom. After their marriage, Jessie and Alvin moved to the family farm south of Pierce. Jessie raised the three children along with helping Alvin with farm work around the farm. She enjoyed gardening, reading, baking and her flower garden, especially the pink flowers. Jessie had been a resident at the Pierce Manor for the past nine years. She was a member of United Church of Christ (First Congregational Church) and its Ladies Aid. Survivors include daughter Linda Jaspring of Rapid City, S.D., son Larry Synovec of Hastings, son Lonnie Synovec Sr. of Pierce; grandson Lonnie Synovec Jr. of Pierce. She was preceded in death by her husband Alvin Synovec in 1996; parents Charles and Alta. Condolences may be expressed to the family on-line at www.stonacekfuneralchapel.com. For the services, pianist will be Shirley Hetrick. Music will be “In The Garden,” “How Great Thou Art” and “Abide With Me.” Casket Bearers will be Phil Wiedenfeld, Lonnie Synovec Jr., Tom Wingert, Roger Synovec, Carlin Synovec, Mike Synovec, Wayne Synovec and Walt Aschoff.

PIERCE -- Funeral service for Jessie A. Synovec, 92, of Pierce will be held at 2:00 p.m., Monday, June 3, 2019 at the United Church of Christ in Pierce with Rev. Terry Buol officiating the service. Interment will be at the Prospect View Cemetery,... View Obituary & Service Information

The family of Jessie A. Synovec created this Life Tributes page to make it easy to share your memories.

Send flowers to the Synovec family.