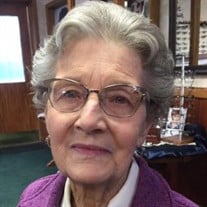 PIERCE -- Private family graveside service for Joan Ruth Chilvers, 93, of Columbus formerly of Pierce will be held on Saturday, December 26, 2020 at the Prospect View Cemetery, Pierce. Officiant for the service will be Rev. Terry Buol. Celebration of life service will be held at a later date. Joan passed away on Tuesday, December 22, 2020 at the Cottonwood House Assisted Living in Columbus. Stonacek Memorial Chapel in Pierce is in charge of the arrangements. Joan was born on January 28, 1927 in McPherson, Kansas to Walter and Edna (Lewis) Myers. She attended grade school in Dodge City, KS until the family moved to Galva, Kansas. She then attended and graduated from Galva High School in 1944. Joan attended and graduated from Kansas State University with a Bachelor of Science degree in 1948 and taught school in Moundridge, Kansas. She married Duane Clyne in 1945 and to this union they had 2 daughters, Diana and Sharon. Joan and Duane later divorced. Joan later married William Chilvers on December 20, 1963 at Federated Church in Columbus and to this union they had 4 children, Dick, Virginia, Mary Sue, and Heather. William died on August 6, 2011. Joan was a Guidance Counselor at Pierce High School in the early 1970’s retiring in 1977. Joan then became a Story Teller in the area schools and libraries for 20 years. She loved telling stories to all the children. She was a member of the United Church of Christ (Congregational) in Pierce where she played the organ for 17 years, and she was a long time library volunteer. She also belonged to the Nebraska Teachers Association. Joan is survived by her children Diana (Warren) Kuhl of Columbus, Sharon Cornelius (Carl Bosland) of San Diego, CA, Charles Richard (Lisa) Chilvers of Shreveport, LA, Virginia Kinley of Lake Tahoe, CA., Mary Sue (Sam) Shada of Loveland, CO., 6 grandchildren, and 13 great-grandchildren. She was preceded in death by her spouse Bill Chilvers, parents Walter and Edna Myers, and daughter Heather Chilvers. Condolences may be expressed to the family on-line at www.stonacekfunerchapel.com.

PIERCE -- Private family graveside service for Joan Ruth Chilvers, 93, of Columbus formerly of Pierce will be held on Saturday, December 26, 2020 at the Prospect View Cemetery, Pierce. Officiant for the service will be Rev. Terry Buol. Celebration... View Obituary & Service Information

The family of Joan R. Chilvers created this Life Tributes page to make it easy to share your memories.

Send flowers to the Chilvers family.