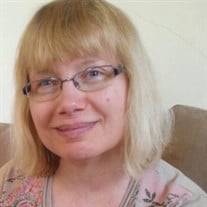 NORFOLK -- Memorial Service for JoAnn Pieper, 54, of Norfolk will be held at 11:00 a.m., Friday, October 26, 2018 at Stonacek Funeral Chapel in Norfolk with Reverend Terry Buol officiating the service. Visitation will take place from 9:00 a.m. till the service time on Friday at Stonacek Funeral Chapel in Norfolk. JoAnn passed away on Sunday, October 21, 2018 at Faith Regional Health Services in Norfolk. Stonacek Funeral Chapel in Norfolk is in charge of the arrangements. Born Jan. 29, 1964, in West Point, JoAnn was the daughter of Arthur and Janice (Batenhorst) Pieper. She graduated from Dodge High School in 1982 and Northeast Community College in 1984. She worked for various agencies in Norfolk and for Parent to Parent as an office manager. JoAnn enjoyed family, friends and get-togethers, listening to ‘80s music, going to the movies and was an avid Huskers fan. Her two kids and two grandkids were her life and joy. She will be greatly missed. Survivors include her son, Michael J. Tosh of Norfolk; a daughter, Jennifer (Cody) Suckstorf of Norfolk; her two precious grandchildren, Parker and Ravyn; her parents, Arthur and Janice Pieper of Lincoln; her brothers, Daniel (Danita) Pieper of Kansas City, Overland Park, Kan. (and family Ashley and Nathan), Russell (Kathy) Pieper of Lincoln (and family Tonya, Lisa, Jennifer, Ryan and Joseph), Steven Pieper of Rantoul, Ill., (and family Matt, Kristopher and Hanna). She was preceded in death by her grandparents, Valen and Dorothy Batenhorst and Joseph and Mary Pieper, and her sister-in-law, Michele Pieper. Condolences may be expressed to the family online at www.stonacekfuneralchapel.com.

The family of JoAnn Pieper created this Life Tributes page to make it easy to share your memories.

Send flowers to the Pieper family.