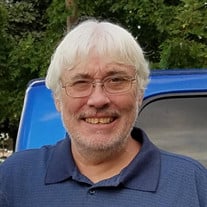 NORFOLK -- Funeral service for John J.M. Carney, 63, of Norfolk will be held at 10:30 a.m., Wednesday, April 13, 2022 at the Sacred Heart Catholic Church in Norfolk. Father Gregory Carl will be officiating the service. Interment will be held at the Prospect Hill Cemetery, Norfolk. Visitation will be 4:00-7:00 p.m., Tuesday at the Stonacek Funeral Chapel in Norfolk with a rosary service beginning at 7:00 p.m. John passed away on Wednesday, April 6, 2022 while on a fishing trip with his friends at Lake of the Ozarks in Missouri. Stonacek Funeral Chapel in Norfolk is in charge of the arrangements. John was born on May 3, 1958 in Neligh, Nebraska to Eugene “Tex” and Joy (East) Carney. He grew up in Oakdale until the family moved to Norfolk in 1963. He attended grade school at Sacred Heart Elementary in Norfolk and graduated from Norfolk High School in 1976. While in high school, John was on the Aqua Jets swim team, and the Norfolk High School swim team. After high school, John and a friend attended a wilderness living class in California climbing mountains for 6 months. He then moved back to Genoa, Nebraska and worked for Lindsay Manufacturing for a short time. He married Diane Earl on August 6, 1983 at the First United Methodist Church in Norfolk. John moved to Norfolk and worked for the Chicago Northwestern Railroad for 10 years. He then began working with his dad “Tex” at the Norfolk Sporting Goods Store and later became owner. He enjoyed fishing, golfing, bowling, and playing pool. He was late for everything except his tee time. John was a member of the Norfolk Eagles Club and was a past treasurer. He was a friend to all and he would drop everything to come help anyone in need. Survivors include his spouse Diane Earl-Carney of Norfolk, children Zack Carney of Norfolk, Max Carney of Norfolk, Nate Carney of Norfolk, his best pal Ziva, parents Eugene “Tex” (Joy) Carney of Norfolk, siblings Susan (Stan) Milne of Omaha, Jean (Dave) Young of Kansas City, Mike (Ana) Carney of Chandler, Ariz., Pat (Elissa) Carney of Norfolk, and Dion (Dr. Melissa) Spanggaard of Tucson, AZ. Casket bearers will be Nate Carney, Dennis Vogt, Greg Kellogg, Cameron Carney, Jim Black, Josh Rajaee, Nick Rajaee, Kellen Carney, and Dylan Kudera. The family requests that memorials be made to the family for a later designation. Condolences may be expressed to the family on-line at www.stonacekfuneralchapel.com.

NORFOLK -- Funeral service for John J.M. Carney, 63, of Norfolk will be held at 10:30 a.m., Wednesday, April 13, 2022 at the Sacred Heart Catholic Church in Norfolk. Father Gregory Carl will be officiating the service. Interment will be held... View Obituary & Service Information

The family of John J.M. Carney created this Life Tributes page to make it easy to share your memories.

Send flowers to the Carney family.