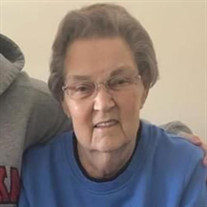 NORFOLK -- Memorial visitation for Joyce M. Rossmeier, 88, of Norfolk will be held from 5:00 - 7:00 p.m., Friday, February 18, 2022 at Stonacek Funeral Chapel in Norfolk. Inurnment will take place at a later date, at Alford Cemetery, rural Monowi, NE. Joyce passed away on Wednesday, February 9, 2022 at the Faith Regional Hospital in Norfolk. Stonacek Funeral Chapel is in charge of the arrangements. Joyce was born on May 20, 1933 to Harry and Inga (Hagen) Honey in Niobrara. Joyce grew up in the Verdell area and was baptized and confirmed at the Evangelical Lutheran Church in Niobrara. She attended grade school at Verdel, and graduated from Verdel High School in 1950. Joyce was united in marriage to Dale Rossmeier on October 12, 1951 at St. John’s Lutheran Church in Bloomfield. In 1973 Joyce began work at the Verdel Post Office as a clerk and was named Postmaster one year later. In 1982 she transferred to the Niobrara Post Office where she was Postmaster until her retirement in 1995 after 22 years of service with the USPS. After the death of Dale in 1999, Joyce moved to Norfolk in 2000. She was employed at Walmart, Hobby Lobby, and Herbergers. She enjoyed spending time at the Senior Center and playing lots of cards with friends. She also enjoyed shopping for clothes, spending time outside, and for a few years enjoyed spending the winter months in Arizona. Survivors include sons Bruce Rossmeier of Columbus, Roger (Deb) Rossmeier of Lynch, Kelly Rossmeier of Norfolk, five granddaughters, five great-grandchildren, and several cousins, nieces, and nephews. She was preceded in death by husband Dale, and parents Harry and Inga. Condolences may be expressed to the family on-line at www.stonacekfuneralchapel.com.

The family of Joyce M. Rossmeier created this Life Tributes page to make it easy to share your memories.

Send flowers to the Rossmeier family.