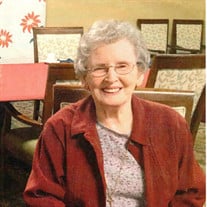 PLAINVIEW -- Funeral service for Joyce Marlene Kingston Splittgerber, 86, formerly of Plainview will be held at 11:00 a.m., Saturday, March 7, 2020 at Zion Lutheran Church in Plainview, with Reverend C. Brian Bucklew officiating her celebration of life service. Visitation will be at the church from 9 AM until the service time, on Saturday. Burial will take place at rural St. John's Lutheran Cemetery East of Pierce. Joyce entered her eternal home on Saturday, February 29, 2020 at the Tabitha Hospice Journey House in Lincoln. Stonacek Memorial Chapel in Pierce is in charge of the arrangements. Joyce was born on October 17, 1933 in Allen, Nebraska to Elmer and Ella (Bass) Kingston. She was baptized on March 21, 1940 at the Methodist Church in Allen, NE. Joyce attended a rural grade school near Allen until 1940 when the family moved to Wayne after the death of her father. She attended & graduated from Wayne Prep School in 1951. She met her future husband while working as a waitress at the Wayne Cafe. Joyce enjoyed the social sport of roller skating during her high school years, but learned to love dancing and card playing more after her marriage to Gilbert Splittgerber on August 23, 1951 at Grace Lutheran Church in Wayne. Joyce was confirmed December 14, 1952 when she joined St. John’s Lutheran church in Pilger. The couple lived & farmed in Wayne, Pierce and Antelope counties through out their marriage until retiring to Plainview in 1998. Joyce and Gilbert belonged to a couples card club for over 60 years where they formed friendships still precious to this day. Since 2017, Joyce has resided primarily at Edgewood Vista in Norfolk, Brookdale in Wayne, Country House in Lincoln, and Tabitha Journey Hospice House in Lincoln, where she has courageously endured the relentless progression of her Alzheimer’s disease. Survivors include spouse Gilbert Splittgerber of Lincoln, children Jacquelyn (Dave) Fredrickson of Lincoln, Paul (Sally) Splittgerber of Norfolk, Brian Splittgerber of Hickman, Karen Splittgerber of Norfolk, 9 grandchildren, 21 great-grandchildren, sister Gale (Harold) Flesner of Aurora, CO and brother, Gary (Diane) Kingston of Niantic, CT, as well as many nieces and nephews. She was preceded in death by parents Elmer and Ella, sisters Mona Faye (& Robert) Meyer, Shirley (& Gene) Fletcher, and brother Lyle (& Joan) Kingston. Organist will be Nancy Schlote. Congregational hymns will be “Near My God To Thee”, “Jesus Loves Me”, and “Savior, Again To Thy Dear Name.” Casket bearers will be Joyce's grandson’s Tony Splittgerber, Kelly Splittgerber, Ryan Splittgerber, Aaron Splittgerber, Nathan Fredrickson, Michael Splittgerber, and Paul Splittgerber. The family requests memorials be given to Zion Lutheran Church and School in Plainview, 102 North 6th Street, PO Box 159, Plainview NE 68769. Condolences may be expressed to the family on-line at www.stonacekfuneralchapel.com.

The family of Joyce M. Splittgerber created this Life Tributes page to make it easy to share your memories.

Send flowers to the Splittgerber family.