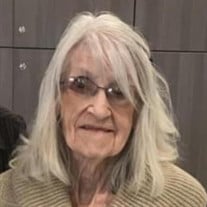 NORFOLK -- Funeral service for Karen A. Krueger, 82, of Norfolk will be held at 10:00 a.m., Friday, March 18, 2022 at the Northern Heights Baptist Church in Norfolk. Pastor David Martinez and John Grimes will be officiating the service. Interment will be held at the Prospect Hill Cemetery, Norfolk. Visitation will be 4:00-7:00 p.m., Thursday, also at Northern Heights Baptist Church. Karen passed away on Sunday, March 13, 2022 at the Faith Regional Hospital in Norfolk. Stonacek Funeral Chapel is in charge of the arrangements. Karen Ann Krueger was born on April 22, 1939 in Wayne, NE to Alvin K. and Grace (Steppat) Jonson. She attended District 55, rural Hoskins, and graduated from Winside High School in 1957. She was married to Ralph V. Krueger on December 21, 1958 at Zion East Lutheran Church, rural Hoskins. After marriage, the couple lived in Norfolk where they attended Northern Heights Baptist Church for 50 years. Karen worked several jobs, including at Norfolk Regional Center and Appeara until she retired 3.5 years ago. Her passions were people, animals, and her love for Jesus. Survivors include her spouse Ralph Krueger of Norfolk, four children Larry Krueger of Stanton, Julie (Noah) Daniel of Norfolk, Doug (Janet) Krueger of Stanton, Mike (Carol) Krueger of Hoskins, 5 grandchildren, 10 great-grandchildren, as well as numerous others who claimed her as mom and family. She was preceded in death by her parents Alvin and Grace, sister Eleanor Kohorn, brother Alvin “Bud” Jonson, and great-grandson Theodore Bernhardt. Casket bearers will be Jack Bernhardt, Dan Carstens, Noah Daniel, Chuck Krueger, Nate Krueger, Josh Schmitz. Condolences may be expressed to the family on-line at www.stonacekfuneralchapel.com.

NORFOLK -- Funeral service for Karen A. Krueger, 82, of Norfolk will be held at 10:00 a.m., Friday, March 18, 2022 at the Northern Heights Baptist Church in Norfolk. Pastor David Martinez and John Grimes will be officiating the service. Interment... View Obituary & Service Information

The family of Karen A. Krueger created this Life Tributes page to make it easy to share your memories.

Send flowers to the Krueger family.