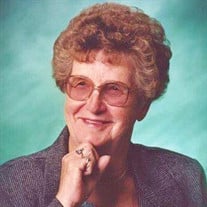 NORFOLK -- Funeral service for Kathryn Y. (Andersen) Skovsende, 86, of Norfolk will be held at 11:00 a.m. Monday, Feb. 3, 2020 at St. John's Lutheran Church in Norfolk. Reverend Randy Rasmussen will be officiating. Burial will take place at the Pilger Cemetery, rural Pilger. A visitation will be held from 1:00 to 3:00 p.m. on Sunday, Feb. 2, at Stonacek Funeral Chapel in Norfolk. A visitation will also take place one hour prior to the service time on Monday at St. John's Lutheran Church. Kathryn died Thursday, January 30, 2020 at the Homestead of Norfolk Assisted Living. Stonacek Funeral Chapel in Norfolk is in charge of the arrangements. Kathryn Y. (Andersen) Skovsende, daughter of Albert and Mildred (Anderson) Meyer, was born April 19, 1933, in Wisner. She attended grade school in Pilger and graduated from Pilger High School in 1951. After graduation, Kathryn worked for several families when new babies were brought home. She also worked for a doctor in Scribner. She lived in Norfolk with her friend, Eunice Rakowsky, and they worked for Nash Finch. She loved to dance and both her spouses “cut the rug” many a Saturday night. She married Emmett Andersen on Oct. 30, 1955, at St. Peter’s Lutheran Church in Pilger. After her marriage to Emmett, she stayed home and raised her children for several years, often helping her spouse at Jim Pile Falstaff, doing his nightly bookwork when he returned to town and then starting back to work at McDonald’s, Montgomery Ward, Our Lady of Lourdes Hospital and Norfolk Junior High School. Emmett died Oct. 18, 1975. Kathryn later married Leo Skovsende on Sept. 9, 1983, at the St. John’s Lutheran Church in Pilger. After her marriage to Leo, she worked at the Pilger Co-op Store. Leo died Jan. 6, 1996. She was extremely proud of her children, grandchildren, great-grandchildren, and great-great-granddaughter. Nothing made her as happy as when her family came to visit. The highlight of her last year was a camping trip to see the Rocky Mountains with three of her grandchildren, daughter and son-in-law. Her one regret was that she hadn’t seen the mountains — very glad we made this trip. She enjoyed making Christmas stockings for family members, baby quilts for newborn babies in the family and decorating for each of the holidays. She also loved giving people a hard time. She was a member of St. Peter’s Lutheran Church in Pilger then later St. John’s Lutheran Church in Norfolk. She belonged to the Good Time Coffee Bunch, church ladies circle and both the American Legion and VFW auxiliaries in Norfolk. Survivors include her children: Deb (Mark) Addison of Hartington, Greg (Judy) Andersen of Norfolk, Ann Marie (Bob) Demerath of Mountain Grove, Mo.; her stepchildren, Cindy (Gary) Rauch of Chicago, Margie (Mike) Heller of Omaha, Amy (Kurt) Petersen of Pilger and Jim (Amy) Skovsende of Elkhorn; 11 grandchildren; nine stepgrandchildren; 17 great-grandchildren; nine step-great-grandchildren; a great-great-granddaughter; and a sister, Phyllis Eckert of Wisner. She was preceded in death by her parents, Albert and Mildred, and both spouses, Emmett and Leo. Organist for the service will be Steve Reinke. Pallbearers will be David Addison, Luke Pinkelman, Adam Dorcey, Brad Andersen, Max Andersen, Tom Weier and Corey Hildebrand. Honorary pallbearers will be the staff of the Homestead of Norfolk Assisted Living Center. Condolences may be expressed to the family online at www.stonacekfuneralchapel.com.

The family of Kathryn Y. (Andersen) Skovsende created this Life Tributes page to make it easy to share your memories.