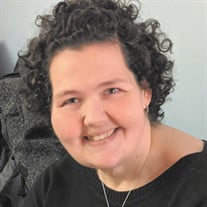 WISNER -- Funeral service for Katrina M. Nissen-Peabody, 44, of Norfolk will be held at 10:30 a.m., Monday, January 24, 2022 at the St. Paul's Lutheran Church in Wisner. Interment will take place at the Wisner Cemetery, Wisner. Visitation will be held from 2:00 - 4:00 p.m., Sunday, at Stonacek Funeral Chapel, Norfolk. In lieu of flowers, the family asks that memorials be made to the family to establish future college savings accounts for her sons. Katrina passed away with her family by her side on Wednesday, January 19, 2022 at her residence in Norfolk after a three year battle with cancer. Stonacek Funeral Chapel is in charge of the arrangements. Katrina Marie Nissen-Peabody was born on June 20, 1977 to Randy and Edwina (Massman) Nissen in Lincoln, Nebraska. She was baptized and confirmed at the St. Paul's Lutheran Church in Wisner. She attended grade school in Wisner and graduated from Wisner-Pilger High School in 1995. After high school Katrina moved to Colorado to work as an in-home nanny. In 2004, Katrina moved to Wayne to attend Wayne State College. There she met the love of her life, Greg. Katrina and Greg Peabody got married on May 8, 2005 at the Methodist Church in Wisner. After marriage the couple moved to Norfolk where Katrina worked for 4 years at Employment Works as a Program Specialist. Katrina then found a need as a para at the Norfolk Senior High School for 3 years. Katrina and Greg were instrumental in the leadership of Pack #165 established in 2013. After years of delay, Katrina returned to school at Wayne State and finally finished her degree, graduating in May of 2021. Katrina enjoyed scrapbooking, paper crafting, reading, and most importantly spending time with her family. Katrina is a member of Christ Lutheran Church, Norfolk and enjoyed playing handbells at Christ Lutheran Church during Christmas. She was a current member of Christ Lutheran Church in Norfolk, and past member of St. Paul's Lutheran Church, Wisner. Survivors include spouse Greg Peabody of Norfolk, children Liam Peabody of Norfolk, Colin Peabody of Norfolk, parents Randy (Edwina) Nissen of Wisner, sisters Megan Nissen of Omaha, Melody (Josh) Hulse of Dakota City, NE, Rachel Nissen of Wisner, and numerous nieces and nephews. Katrina was preceded in death by her paternal and maternal grandparents, father-in-law Tom Peabody Jr., uncle Don Massman, and aunt Donna Mae Murray. Casket bearers will be Richard Peabody, Josh Hulse, Tyler Hulse, Leon Hussman, Dallas Webb, Chris Beganman, and Ben Whatley. Condolences may be expressed to the family on-line at www.stonacekfuneralchapel.com.

WISNER -- Funeral service for Katrina M. Nissen-Peabody, 44, of Norfolk will be held at 10:30 a.m., Monday, January 24, 2022 at the St. Paul's Lutheran Church in Wisner. Interment will take place at the Wisner Cemetery, Wisner. Visitation will... View Obituary & Service Information

The family of Katrina M. Nissen-Peabody created this Life Tributes page to make it easy to share your memories.

Send flowers to the Nissen-Peabody family.