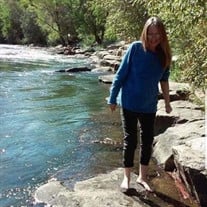 MADISON -- Memorial service for Kelly J. Lambley, 53, of Madison will be held at 10:30 a.m., Thursday, April 21, 2022 at the Stonacek Funeral Chapel in Norfolk. Rev. Terry Buol will be officiating the service. No burial is planned at this time. Visitation will be 5:00-7:00 p.m., Wednesday, at the Stonacek Funeral Chapel. Kelly passed away on Monday, April 11, 2022 at her residence in Madison. Stonacek Funeral Chapel in Norfolk is in charge of the arrangements. Kelly was born on November 20, 1968 in Kearny, New Jersey to John and Jean (O’Keefe) Williams. She was raised in New Jersey before moving to Denver, Colorado when she was eight years old and she attended school there. She married Brent Lambley and to this union were born four daughters; Kayla, Haley, Christine and Rachel. They later divorced. She later met Luke Drozd and they have been together for 21 years. To this union they have one son, Hayden. In 1988 Kelly moved to Norfolk where she became a stay-at-home mom taking care of her four daughters. After her kids grew older, she got a job working at Tyson Foods in Norfolk. She then decided to go back to school to earn her degree and in 2009 she graduated from Northeast Community College with a degree in Psychology. She enjoyed playing spades, poker, collecting all types of frog statues, growing plants and flowers, and working in her garden. Kelly loved her dogs, cat, squirrels, and koi fish. Survivors include her significant other Luke Drozd of Madison, children Kayla Lambley and her partner (Aaron Griffin-Wills) of Lincoln, Haley (Ian) Ohlman of Lincoln, Christine Lambley of Madison, Rachel (Justice) Starman and their son Jaxson of Norfolk, Hayden Drozd of Madison, sisters Kathleen O’Keefe of Denver, CO., and Joyce Williams of New York, brother John (Leigh) Williams of North Carolina. She was preceded in death by her parents John and Jean Williams, and sister Sherri Williams. Condolences may be expressed to the family on-line at www.stonacekfuneralchapel.com.

MADISON -- Memorial service for Kelly J. Lambley, 53, of Madison will be held at 10:30 a.m., Thursday, April 21, 2022 at the Stonacek Funeral Chapel in Norfolk. Rev. Terry Buol will be officiating the service. No burial is planned at this time.... View Obituary & Service Information

The family of Kelly J. Lambley created this Life Tributes page to make it easy to share your memories.

Send flowers to the Lambley family.