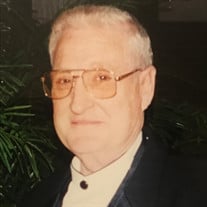 NORFOLK -- Memorial service for Kenneth D. "Ken" Mitchell, 79, of Norfolk will be held at 2:00 p.m., Saturday, April 13, 2019 at the Victory Road Assembly of God Church with Evangelist Gordan Hofer officiating. Private family inurnment will be held at a later date. Ken died Monday, April 8, 2019 at the Faith Regional Hospital in Norfolk. Stonacek Funeral Chapel in Norfolk is in charge of he arrangements. Kenneth D. “Ken” Mitchell was born Oct. 11, 1939, in Iowa City, Iowa, the son of Delbert and Margaret (Reiter) Mitchell. He graduated from Spirit Lake High School in Iowa in 1957. After graduating high school, Ken worked at Thrifty Market in Spirit Lake, Iowa, where he met the love of his life, Fern Gilbert. Ken and Fern got married in Spirit Lake in 1959. After marriage, Ken went on to work for John Morrell for many years. In 1973, the couple moved to Coleridge, where Ken owned and operated Mitchell Meat Lockers. The family then bought Ray’s Store, reopening as Ken’s GW Market in Coleridge in 1974. His brother, Ed, came to operate Mitchell Meat Lockers. In 1975, they bought the acreage on which they would live for the next 39 years. During his entire life, Ken always gave to people in need without seeking credit. He then retired in 2005, selling his store which still bears his name. Ken was a loving family man, raising his family in the Coleridge area up until moving to Norfolk in 2014. Ken was devoted to his Lord, and it was important to him that his family knew the Lord, as well. In Ken’s later years, he enjoyed carving wood, gardening, fishing, as well as working for the meat locker plant in Fordyce during his retirement years. He enjoyed raising hogs, chinchillas, pheasants, horses and training huskies. Ken loved his family very much. He was a member of Victory Road Assembly of God Church in Norfolk and a member of The Coleridge Wood Carvers. Survivors include his spouse, Fern Mitchell of Norfolk; his children, Dan (Shelly) Mitchell of Danube, Minn., Marjean (Kory) Smith of Abeline, Kan., Lonny (Amy) Mitchell of Norfolk, Julie (Tom) Green of Yale, Okla., Janine Mitchell-Allen D.C. (Shane Allen D.C.) of Lindale, Texas; 12 grandchildren: Judith and Christine Mitchell, Lee (Mike) Benton, Jamie Smith, Kenny, Ruby, Pearl Mitchell, Kaleb and Jessica Green, Mitchell, Jackson and Jordynne Allen; and a brother, David (Olivia) Mitchell of Britt, Iowa. He was preceded in death by his parents, Delbert and Margaret; his brother, Edger; and two sisters, Jeannette McCann, and Ruth Sampson Pianist for the service will be Kenny Mitchell. Condolences may be expressed to the family online at www.stonacekfuneralchapel.com

The family of Kenneth D. "Ken" Mitchell created this Life Tributes page to make it easy to share your memories.

Send flowers to the Mitchell family.