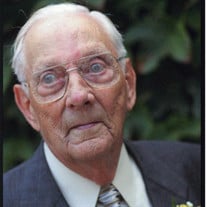 NORFOLK -- Funeral service for Kenneth L. "Bud" Timperley Sr., 95, of Fremont will be held 10:30 a.m., Thursday, February 14, 2019 at Stonacek Funeral Chapel in Norfolk with Reverend Coral Parmenter officiating the service. Burial will take place at Hillcrest Memorial Park Cemetery in Norfolk. Visitation will be held from 5:00 - 7:00 p.m., Wednesday, also at Stonacek Funeral Chapel in Norfolk. Military rites will be conducted by the American Legion Post #16, V.F.W. Post #1644, and the United States Marine Corps Honors Guard. Kenneth died Saturday, February 9, 2019 in Fremont. Stonacek Funeral Chapel in Norfolk is in charge of the arrangements. Bud was born November 20, 1923 on the family farm in Norfolk, the sixth child to John "Roy" and Margaret (Voss) Timperley. He joined the Marines in 1945 and was stationed in San Diego CA. Bud and Lucile Wiedeman exchanged vows on November 27, 1946 at the Methodist Church in Concordia, KS. After his discharge from the Marines, they made their home in Norfolk NE. Bud worked for the Chicago Northwestern Railroad for several years. Shortly after, Bud moved his family to Omaha, where he worked with Greyhound Bus Lines for 30 years. He retired from Greyhound in 1983. Bud and Lucile traveled extensively throughout the Southern United States, eventually living part time in their homes in Fremont and Texas. Bud was a 32nd degree Mason and a member for 50+ years of both the Masons and the Eastern Star. He was also a member of the American Legion, York Rite bodies, Knights Templar and Shriner's International. In Bud's younger years he enjoyed attending parades and the Shrine Circus as a member of the motorcycle patrol. During those years he traveled extensively with the patrol throughout the mid-west and Canada supporting Shriner's Hospital. Bud was immensely proud of children and grand-children. They were not only the light of his life but his biggest supporters. His children and grandchildren loved to hear his stories, amazing true life stories. Bud was a major story teller, the family keeper of memories, dates, and happenings. He had an amazing 95 year journey; he took his family and friends with him through his memories and stories. Bud is survived by his sons Kenneth Jr. (Annette) Timperley of Fremont, Keith Timperley of Omaha, daughters Beverly (Gary) Buhrman of Wisner, Lynette (Jeff) Kempcke of Blair, daughter-in-law Jenny Timperley of Cedar Bluffs, NE, 15 grandchildren, 25 great-grandchildren, and two great-great grandchildren, two brothers Dean Timperley of Norfolk, Lee Timperley of Battle Creek, brother-in-law Marlin (Madelyn) Wiedeman of Denver, CO, sisters-in-law Bonnie Phillips of Waxahachie, TX, Jeanette Kolpin of Santa Monica, CA, Shirley (Ron) Cummings of Pottsboro, TX, Mary Wiedeman of Tulare, CA, and numerous nieces and nephews. He is preceded in death by his parents John and Margaret, wife Lucile of 65 years who passed away in 2011, son Roger Timperley Sr. in 2018, brothers Howard, Russell, Ray, sisters Hazel Raymond, and Roma Droescher. Organist will be Betty Frank and Soloist Linda Boullion singing "Old Rugged Cross" and "How Great Thou Art"; congregational hymn will be "Amazing Grace". Casket Bearers will be Seth Pfaltzgraff, Bradley Buhrman, John Timperley, Roger Timperley Jr., Kevin Buhrman, and Scott Buhrman. Memorials may be directed to Shriner's Hospital, Masonic Home; as well as "S.M.I.L.E. INC." Condolences may be expressed to the family on-line at www.stonacekfuneralchapel.com.

The family of Kenneth L. "Bud" Timperley Sr created this Life Tributes page to make it easy to share your memories.

Send flowers to the Timperley family.