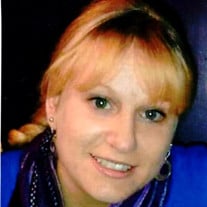 NORFOLK -- Funeral service for Kimmera D. Stahlecker, 32, of Hastings formerly of Norfolk will be held at 10:30 a.m., Tuesday, December 29, 2020 at the Stonacek Funeral Chapel in Norfolk. Deacon John Mines will be officiating. Interment will be held at the Hillcrest Memorial Park Cemetery, Norfolk. Visitation will be 4:00-7:00 p.m., Monday with a vigil service beginning at 7:00 p.m., also at the Stonacek Funeral Chapel. The funeral service will be live-streamed on the Stonacek Funeral Chapel Facebook page. Kimmera passed away on Thursday, December 24, 2020 at the Bryan East Medical Hospital in Lincoln. Stonacek Funeral Chapel in Norfolk is in charge of the arrangements. Kimmera D. Stahlecker was born Oct. 5, 1988, in Norfolk, the daughter of Rex and Tracy (Lueken) Stahlecker. She attended Washington Elementary in Norfolk and graduated from Norfolk High School 2006 and mortuary school in Colorado. Kimmera will be remembered as a very strong, free-spirited woman. Much of Kimmera and Landon’s everyday life was devoted to the daily extracurricular activities of their daughter, Lillian. It was with great joy of theirs to be in the stands of all her softball games, dance and school activities. Kimmera’s specialties were hosting sleepovers, camping trips, playing board games and long games of poker. She was a very proud mother. She received her funeral directors degree, working for Stonacek Funeral Chapel. Kimmera moved to Hastings to raise her family. She worked as a mail route carrier, driving from Grand Island to Burwell daily for three years. She pursued a surgery tech position prior to her passing. She was a member of Sacred Heart-St. Mary’s Parish in Norfolk. Grateful for having shared her life are her daughter, Lillian, and the love of her life, Landon Jensen of Hastings; her parents, Rex and Tracy (Lueken) Stahlecker of Norfolk; a sister, Angela Kruid and fiancé Nathan Wortman of Norfolk; brother Trevor (Jennifer) Stahlecker of Lincoln; grandmothers Delores Stahlecker of Stuart and Helen Lueken of Lynch; special family members Les, Linda and Lacy Jensen of Central City; aunts, uncles, cousins and friends too numerous to mention. Casket bearers will be Riley Chohon, Aaron Chohon, Tyson Chohon, Travis Hochstein, Beau Schommer and Lukas Dougherty. Condolences may be expressed to the family online at www.stonacekfuneralchapel.com.

NORFOLK -- Funeral service for Kimmera D. Stahlecker, 32, of Hastings formerly of Norfolk will be held at 10:30 a.m., Tuesday, December 29, 2020 at the Stonacek Funeral Chapel in Norfolk. Deacon John Mines will be officiating. Interment will... View Obituary & Service Information

The family of Kimmera D. Stahlecker created this Life Tributes page to make it easy to share your memories.

Send flowers to the Stahlecker family.