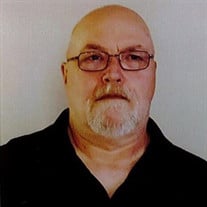 NORFOLK -- Memorial service for Larry G. Miller, 63, of Norfolk will be held 10:30 a.m., Wednesday, September 1, 2021 at Stonacek Funeral Chapel in Norfolk. Rev. Scott Krohn will be officiating the service. Private family inurnment will take place at a later date. Visitation will be 4:00 - 7:00 p.m., Tuesday, at Stonacek Funeral Chapel in Norfolk. Larry died on Thursday, August 26, 2021 at the University of Nebraska Medical Center in Omaha. Stonacek Funeral Chapel in Norfolk is in charge of the arrangements. Born June 9, 1958, in Norfolk, Larry Miller was the son of Kenneth and Barbara (Olson) Miller. He attended county school to the fifth grade and Pierce Elementary School before graduating from Pierce High School in 1976. He married Becky Behnke on Aug. 7, 1976, at St. John’s Lutheran Church in rural Pierce. After marriage, the couple lived in Pierce a short time. They then moved to Norfolk, where Larry worked at Nucor Steel for 32 years as a stacker. Larry enjoyed hunting, golfing, fishing, woodworking and reading. He was a member of Mount Olive Lutheran Church in Norfolk. Survivors include his spouse, Becky Miller of Norfolk; children: son Mike Miller of Sioux Falls, S.D., daughters Amanda Miller of Sioux Falls and Melissa Miller of Sioux Falls; mother Barbara Miller of Norfolk; siblings Jim (Veronica) Miller of Pierce, Deb (John) Reding of Norfolk and Randy (Pam) Miller of Norfolk; many nieces and nephews; and his dog, Buddy. He was preceded in death by his father, Kenneth Miller. Condolences may be expressed to the family online at www.stonacekfuneralchapel.com.

The family of Larry G. Miller created this Life Tributes page to make it easy to share your memories.

Send flowers to the Miller family.