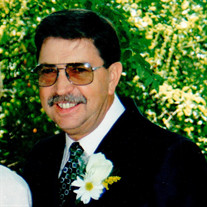 STANTON -- Celebration of life service for Larry E. Nutter, 81, of Stanton will be held 10:30 a.m., Friday, December 14, 2018 at the Harvest Church in Norfolk with Pastor Mike Gardner officiating the service. Private family inurnment will be held at a later date. Visitation will be held from 4:00 - 7:00 p.m., Thursday, at Stonacek Funeral Chapel in Norfolk. Larry died Monday, December 10, 2018 at the Faith Regional Hospital in Norfolk. Stonacek Funeral Chapel in Norfolk is in charge of the arrangements. Larry was born on September 27, 1937 in Randall, Minnesota to Walter and Bertha (Bergren) Nutter. He graduated from Little Falls High School at Little Falls, Minnesota in 1955. After high school Larry was in the Minnesota National Guard from 1955-1963 and was learning the trade of a glass cutter in the Minneapolis area. Then went on to own his own glass company. As a young child until early teens he had a stuttering problem, but Jesus healed him, so he could become a successful insurance salesman. His love of horses began very early since his Dad was a farmer and sold, bought & traded horses and Larry got to ride a pony to school. He enjoyed learning all his horse skills from his Dad. Larry enjoyed antique cars and was a member of the Norfolk Antique Car Club. He was united in marriage to Ellen (Haskin) Froman on August 18, 1998. Larry is survived by his wife Ellen of Stanton; son Timothy (Gloria) Nutter of LaCrosse, WI., daughter Lisa Nutter from Holmen, WI., granddaughters Brandie (Roscoe) Korn of LeMoore, CA., Elizabeth (Tyler) Leitzke of LaCrosse, WI. great - grandchildren: Hailie and Madison Korn, Zoe and Asher Leitzke, and Ellen’s son, Brent (Staci) Froman and their children, Brylee and Garrison from Bristol, IN. He was preceded in death by his parents, sister, brother, and two daughters. Memorials may be made to Harvest Church, 1810 Channel Road Norfolk, NE 68701 or RFD TV, Cowboy Church TV P.O. Box 67 Brush, CO 80723 Condolences can be expressed to the family online at www.stonacekfuneralchapel.com

STANTON -- Celebration of life service for Larry E. Nutter, 81, of Stanton will be held 10:30 a.m., Friday, December 14, 2018 at the Harvest Church in Norfolk with Pastor Mike Gardner officiating the service. Private family inurnment will be... View Obituary & Service Information

The family of Larry E. Nutter created this Life Tributes page to make it easy to share your memories.

Send flowers to the Nutter family.