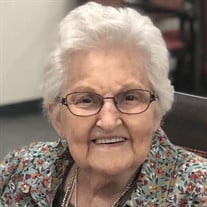 PIERCE -- Funeral service for LaVern Schulz, 90, of Pierce, will be held at 10:30 a.m., Saturday, February 19, 2022 at the Zion Lutheran Church in Pierce. Rev. Gordon Bruce and Vicar Chad Berg will be officiating the service. Interment will be held at the Prospect View Cemetery, Pierce. Visitation will be 4:00-7:00 p.m., Friday, also at the Zion Lutheran Church in Pierce. LaVern passed away on Monday, February 14, 2022 at The Meadows Assisted Living in Norfolk. Stonacek Memorial Chapel in Pierce is in charge of the arrangements. Memorials are suggested to Pierce Rescue Services, Pierce Senior Center and Zion Lutheran Church. LaVern Schulz was born July 29, 1931, in Pierce, the daughter of August and Christina (Becker) Wragge. She was baptized Nov. 1, 1931, and confirmed April 14, 1946, both at Christ Lutheran Church in Pierce. She graduated from Pierce High School in 1948 and Wayne State Teacher’s College. She taught at District 33 Country Schoolhouse from 1951 to 1952 before marrying Kenneth Dickinson on June 1, 1952, at Christ Lutheran Church in Pierce. She then worked as a local administrator of social services for Pierce, Cedar, Antelope, Knox and Wayne counties for 38 years, from 1954 to 1993. Kenneth passed away on Oct. 18, 1998. On Jan. 19, 2002, she married Clair Schulz at Crescent City, Fla. He passed away on Jan. 20, 2015. LaVern lived in Pierce throughout her life until moving to The Meadows Assisted Living in Norfolk in 2018. She was a member of Christ Lutheran Church, Zion Lutheran Church and the American Legion Tomek-Otto Post Auxiliary of Pierce. She loved fishing, ballroom and polka dancing, playing cards, traveling and china painting. Survivors include two daughters, Janice Sandoz and spouse John Sandoz of Anthem, Ariz., and Holly Butler and spouse Norbert Butler of Damascus, Md.; a grandson, Nick Butler of Damascus; a stepson, Randy (Lorrie) Schulz of Surprise, Ariz.; a stepdaughter, Linda Schulz of Lincoln; two step- granddaughters; two stepgreat-grandsons; and many nieces and nephews. She was preceded in death by her father, August Wragge; her mother, Christina Wragge; a brother, Harold Wragge; a sister, Wilma Wulf; a brother, Vernon Wragge; and both spouses, Kenneth Dickinson and Clair (Cy) Schulz. Music will be provided by pianist Dottie Ahlers and vocalists Rick and Cheryl Higgins. Song selections include “Whispering Hope,” “Wind Beneath My Wings,” with the congregational hymn “How Great Thou Art,” and recorded music by Jan Sandoz, “In The Garden” and “The Lord’s Prayer.” Casket bearers will be Rick Bonge, Mark Dickinson, Dick Evans, Dave Tague, Craig Wulf and Harold Wulf. Honorary pallbearers are Norbert Butler, John Sandoz, Nick Butler and Randy Schulz. Online condolences may be left at www.stonacekfuneralchapel.com.

PIERCE -- Funeral service for LaVern Schulz, 90, of Pierce, will be held at 10:30 a.m., Saturday, February 19, 2022 at the Zion Lutheran Church in Pierce. Rev. Gordon Bruce and Vicar Chad Berg will be officiating the service. Interment will... View Obituary & Service Information

The family of LaVern Schulz created this Life Tributes page to make it easy to share your memories.

PIERCE -- Funeral service for LaVern Schulz, 90, of Pierce, will...

Send flowers to the Schulz family.