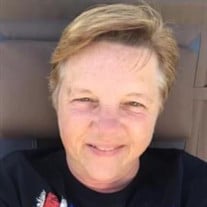 NORFOLK -- Memorial service for LeAnn L. Daniels, 58, of Norfolk will be held at 10:30 a.m. Monday, September 6, 2021 at the Stonacek Funeral Chapel in Norfolk, with Pastor Tim DeFor officiating. A visitation will take place from 2:00 p.m. to 4:00 p.m. on Sunday, September 5, 2021 at the Stonacek Funeral Chapel in Norfolk. A private inurnment will take place at a later date. LeAnn passed away on Thursday, September 2, 2021 at the Madonna Rehabilitation Hospital in Omaha. Stonacek Funeral Chapel is in charge of the arrangements. LeAnn Lois Daniels was born Sept. 16, 1962, in Norfolk, the daughter of Bob and Cleo (Schuchardt) Wind. She attended Northern Hills Elementary in Norfolk and graduated from Norfolk High School in 1981. After graduating from Norfolk High School, LeAnn got a job working at Dale Electronics, where she worked for some time before working at Lou’s Thrifty Way in Norfolk. LeAnn later began working for the Norfolk Regional Center until working at Tastee Treat, where she worked until her retirement in 2018. She enjoyed baking, camping, boating on the pontoon boat, watching the birds and nature and watching beautiful sunsets. LeAnn found a love and ability in creating art, which she expressed though producing rocks. Most of all, she enjoyed the time she got to spend with her family. She married Steven “Steve” Daniels on Oct. 27, 1999, in Madison. She was a member of First Christian Church in Norfolk. Survivors include a spouse, Steven Daniels of Norfolk; children Levi (Laci) Weber of Tilden and Kati (Chris) Gohring of Norfolk; along with six grandchildren, Paisley, Ryker, Hendrix, Riggins, Dempsey and Oakley; and brother Bill (Karen) Wind of Norfolk. She was preceded in death by her parents; brother Steve Wind; and sister Cheryl Weinrich. Honorary casket bearers will be Brian Lindell, Aaron Weinrich, Jerry Weinrich, Jason Duncan and Jordan Wind. Condolences may be expressed to the family online at www.stonacekfuneralchapel.com.

NORFOLK -- Memorial service for LeAnn L. Daniels, 58, of Norfolk will be held at 10:30 a.m. Monday, September 6, 2021 at the Stonacek Funeral Chapel in Norfolk, with Pastor Tim DeFor officiating. A visitation will take place from 2:00 p.m. to... View Obituary & Service Information

The family of LeAnn L. Daniels created this Life Tributes page to make it easy to share your memories.

Send flowers to the Daniels family.