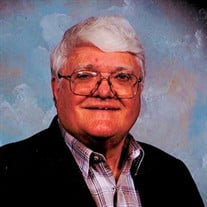 NORFOLK - Leon Kenneth Lauver, 89, of Norfolk, Nebraska, a resident of the Norfolk Veterans Home, passed away on Monday January 24, 2022. There will be a private family funeral service, to be determined at a later date and private family burial at the Fairview Cemetery, rural Madison, NE. Stonacek Funeral Chapel in Norfolk is in charge of the arrangements. Leon was born on the farm to Leo M. Lauver and Mildred (Reeves) Lauver in June of 1932. He attended elementary school near the farm before moving to Norfolk, NE. He graduated from Norfolk High School in 1950. He attended Wayne State teachers College, playing football during his time in Wayne. He then attended The University of Nebraska during which time; he enlisted in the Army and completed his service in June of 1955, then returning to the University of Nebraska to graduate from the Architectural College in February of 1958. Leon was married to Ruth Goodman in August of 1957, they were married 64 years. Leon started his Architecture career with Emiel J. Christensen Architectural Firm of Columbus, NE. from 1958 to 1964 completing licensing requirements in the State of Nebraska. Leon went on to start his own Architectural Firm, Leon K. Lauver & Associates, Inc. and throughout his career, he was licensed in 35 states and, over the course of time, designed Hospitals; Nursing Homes; Schools; Retail Centers; Industrial, Hospitality, Entertainment facilities; as well as Multi-family and Custom Residential housing across the United States. Leon is survived by his wife Ruth, his son Cameron Lauver (Lisa) of Pierce, NE. and his granddaughter Jordane Lauver, as well as other family members and friends. Leon is preceded in death by son Darin Jon Lauver and son Kevin Lee Lauver, his father Leo M. Lauver and his mother Mildred (Reeves) (Lauver) Haire. In lieu of flowers, memorial donations may be given to the Wounded Warriors Project (https://support.woundedwarriorproject.org or call 855-448-3997). The family of Leon K. Lauver wishes to thank the Norfolk Veterans Home and their wonderful staff as they do God’s work. Condolences may be expressed to the family on-line at www.stonacekfuneralchapel.com.

NORFOLK - Leon Kenneth Lauver, 89, of Norfolk, Nebraska, a resident of the Norfolk Veterans Home, passed away on Monday January 24, 2022. There will be a private family funeral service, to be determined at a later date and private family burial... View Obituary & Service Information

The family of Leon Kenneth Lauver created this Life Tributes page to make it easy to share your memories.

Send flowers to the Lauver family.