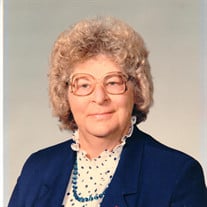 NORFOLK -- Funeral services for Leona C. Mussack, 86, of Norfolk will be held at 1:00 p.m., Saturday, October 13, 2018 at Stonacek Funeral Chapel in Norfolk. Chaplain Gordon Braun will officiate the service. Visitation will be held from 11:00 a.m. - 1:00 p.m., prior to the service on Saturday. Burial will take place at Prospect Hill Cemetery in Norfolk. Leona passed away on Sunday, October 7, 2018 at Stanton Health Center in Stanton. Stonacek Funeral Chapel in Norfolk is in charge of the arrangements. Born Oct. 1, 1932, in West Point, she was the daughter of Ewald and Ida (Hartwig) Einemann. She was baptized and confirmed at Grace Lutheran Church in West Point and graduated from West Point Public School in 1950. She married David Mussack on Nov. 8, 1951, at Grace Lutheran Church in West Point. She was a loving spouse and homemaker at each of the residences they lived. Their first home was in Chicago, Ill., followed by Fremont and then West Point. In 1956, they moved to Norfolk, where they resided the rest of their lives. Leona enjoyed many hobbies, such as cross stitching, jigsaw puzzles, crossword puzzles, gardening, craft work and bird watching. For a number of years, David and Leona enjoyed participating in bowling leagues. She also collected thimbles, tea pots and other collectibles. She liked to read, play cards and enjoyed traveling to visit family and friends. Survivors include her brothers, Leland Einemann of West Point and Larry (Paula) Einemann of Lincoln; a sister, Linda Lindquist of Norfolk; her sisters-in-law, Jaunita Mussack of Phoenix, Ariz., Irene Mussack of Inglewood, Calif., Carol Mussack of Tucson, Ariz., along with cousins and many nieces and nephews. She was preceded in death by her parents, Ewald and Ida; her spouse, David; and her brothers-in-law, Joe Mussack, Bert Mussack, Louis Mussack, James Mussack and Roger Lindquist; and her sisters-in-law, Lorraine Mussack and Betty Volker. Casket bearers will be Michael Andersen, Roger Volker, Chad Hempstead, Jon Blake, Jzar Templin and Ray Templin. Condolences may be expressed to the family online at www.stonacekfuneralchapel.com.

NORFOLK -- Funeral services for Leona C. Mussack, 86, of Norfolk will be held at 1:00 p.m., Saturday, October 13, 2018 at Stonacek Funeral Chapel in Norfolk. Chaplain Gordon Braun will officiate the service. Visitation will be held from 11:00... View Obituary & Service Information

The family of Leona C. Mussack created this Life Tributes page to make it easy to share your memories.

Send flowers to the Mussack family.