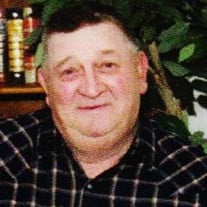 PIERCE — Funeral service for Leonard F. Vyhlidal, 74, of Pierce, will be at 10:30 a.m. Monday, October 15, 2018 at the St. Joseph’s Catholic Church in Pierce. Burial will be in the parish cemetery, rural Pierce. Visitation will be 4:00-7:00 p.m. Sunday, also at the church with Rosary beginning at 7:00 p.m. Leonard died Thursday, Oct. 11, 2018, at Nebraska Medical Center in Omaha. Military rites will be conducted by Tomek-Otto Post 72 American Legion Pierce and the United States Army Honors Guard. Stonacek Memorial Chapel of Pierce is in charge of the arrangements. Leonard was born Feb. 20, 1944, in Pierce, to John J. and Emma (Frank) Vyhlidal. He was baptized at St. Joseph’s Catholic Church in Pierce. He attended Pierce Public Schools in Pierce. Leonard farmed in Pierce throughout his entire life. He farmed with his brothers, Ray, Alvin and Donnie at times, but primarily with his cousin, Joe Vyhlidal, for 50 plus years. Joe and Leonard received the Conservation Honor Farm Award in 2008 from the Lower Elkhorn NRD. After Joe’s passing, he continued farming with Jon Brandt. Not only was farming his career, it was his hobby. He did love visiting at the Co-op with his farming buddies talking shop. Although he was not much of social butterfly he did like to polka, play cards or occasionally play the slots at the casino. Leonard was in the U.S. Army from May 31, 1966, to Oct. 17, 1966. Saint Joseph’s Catholic Church of Pierce laid the foundation for Leonard’s strong faith and his love for the Lord. Saturday night Mass was one of the few things that got him off his Case International 7250 tractor. He was a lifetime member of the church. Leonard died at UNMC surrounded by his family. He died of acute heart failure, which the family didn’t understand but realized that this generous golden heart gave so much love and kindness to all he met. He is survived by his siblings, Donald (Charlotte) Vyhlidal, Helen Butts; extended family Connie (Jon) Brandt, Elaine (Dennis) Renner, Douglas (Donna) Vyhlidal; nephews and nieces Michelle (Philip) Hadley, Stacy Welch, Pat (Randy) Sanley, Jan (Tim) Grossnicklaus, Ken (Ruth) Kloke, Robert (Diane) Pospisil, Rachele Pospisil, Rhonda (Jim) Rowley, Duane (Tamara) Volden, D.J. (Jessica) Vyhlidal, and Lydia Kay Vyhlidal. He was preceded in death by his parents, John J. and Emma; surrogate parents Joe and Donna Vyhlidal; and brothers and sisters Melvin, Alvin, Raymond, Hilda Pospisil and Agnes Kloke. Organist for the ceremony will be Celine Fehringer with soloist Robin Eberhardt and the St. Joseph’s Church Choir singing “Here I am Lord,” “On Eagle’s Wings,” “We Will Rise Again” and “Amazing Grace.” Casket bearers will be Jon Brandt, Joe Brandt, Bryan Vyhlidal, Ben Vyhlidal, Tim Pint, Jerry Rowley, Dean Henzler, Mark Henzler and Jesse Sackville. Honorary casketbearers will be Duane Volden, Ryan Pospisil, Jim Wachter, John Schulz, Reese Eberhardt, Mike White, Mike Harrison and Bill E. Vyhlidal. Online condolences may be sent to www.stonacekfuneralchapel.com.

The family of Leonard F. Vyhlidal created this Life Tributes page to make it easy to share your memories.

Send flowers to the Vyhlidal family.