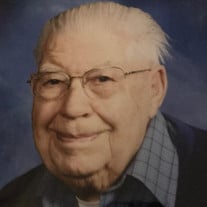 PIERCE -- Funeral service for Leslie L. "Les" Ziemer, 93, of Pierce, will be held at 10:30 a.m., Tuesday, May 14, 2019 at Zion Lutheran Church in Pierce with Reverend Gordon Bruce and Vicar Joshua Mork officiating the service. Private family inurnment at Hillcrest Memorial Park Cemetery in Norfolk will take place at a later date. Visitation will be held from 4:00 - 7:00 p.m., Monday, at Stonacek Memorial Chapel in Pierce. Les died Thursday, May 9, 2019 at the Norfolk Care and Rehab Center in Norfolk. Military rites will be conducted by American Legion Post 16, VFW Post 1644 and the U.S. Navy Honors Guard. Stonacek Memorial Chapel in Pierce is in charge of the arrangements. Born June 18, 1925, in McLean, Leslie L. Ziemer was the son of Harry and Hattie (Miller) Ziemer. He was baptized on June 28, 1925, and confirmed Nov. 13, 1933, both at Hope Lutheran Church in McLean, and attended grade school to the eighth grade in the rural McLean area. He served in the U.S. Navy from May 25, 1944, to April 4, 1947. He married Julene Hixson on Oct. 23, 1949, at Zion Lutheran Church in Pierce. He was employed by the Nebraska Department of Roads. Les enjoyed taking care of his vegetable gardens and growing flowers. He did custom plowing with his Case tractor for other people’s gardens, tinkered with his tractors and cared for his dogs. Les and Julene lived in their same home for 65 years. He was a member of Zion Lutheran Church in Pierce. Survivors include his spouse, Julene Ziemer of Norfolk; his daughters, Diane Acklie-Smith and spouse Lee of Pierce and Denise (Kenneth) Reed of Hoskins; his daughter-in-law, Connie Ziemer of Pierce; six grandchildren; 13 great-grandchildren; two great-great- grandchildren; and a sister, Lois Luebbers of Pierce. Preceding him in death were his parents, Harry and Hattie; a son, Danny Ziemer; and a grandson, Mitch Ziemer. Organist for their service will be Dottie Ahlers. Musical selections are “I Am But A Stranger Here,” “Amazing Grace,” “Abide With Me,” and the recorded hymn, “In Daddy’s Hands.” Casket bearers will be Michael Ziemer, Jeremy Reed, Eric Acklie, Kyle Reed, Kenneth Reed and Lee Smith. Condolences may be expressed to the family online at www.stonacekfuneralchapel.com.

The family of Leslie L. "Les" Ziemer created this Life Tributes page to make it easy to share your memories.

Send flowers to the Ziemer family.