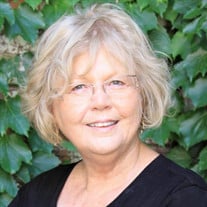 NORFOLK - Celebration of life service for Linda L. Sparr, 72, of Norfolk, will be held at 3:30 p.m., Sunday, June 28, 2020 at the Stonacek Funeral Chapel in Norfolk with Pastor Eric Biehl officiating. Visitation will begin one hour prior to the service. Private family burial will be held at a later date. The service will be live streamed on the Stonacek Funeral Chapel Facebook page. She passed away peacefully at her home in Norfolk on Monday, June 22, 2020. In lieu of flowers, the family requests that memorials be made to the family for a later designation. Stonacek Funeral Chapel is in charge of the arrangements. Linda was born on February 1, 1948 in Kentfield, California and was the only child of Robert “Pineapple Bob” Powell, who married Peggy (Megremis) Powell when Linda was just a toddler. Linda was their only child and spent her younger years in San Francisco. Bob’s naval career took them all over the United States, but the family eventually landed in Honolulu, Hawaii where they settled in, put down roots and fell in love with the Sunshine State. After graduating from Radford High School in Honolulu, Linda came to Northeast Nebraska with a girlfriend, for what was supposed to be a six-month visit. Fate had something else in store and Linda met and married Larry Sparr in 1967. Larry and Linda had one daughter, Candace Leigh, in 1969. While the marriage ended after 39 years, Linda continued to consider Nebraska her home although she always had a longing for both San Francisco and Hawaii, and visited often. Linda, a stay at home mom for most of Candace’s growing up years, did manage to get herself elected to the Meadow Grove Village Board in the early 80s, she was reportedly the first woman in Northeast Nebraska to be elected to a similar position. In 1985 Linda rejoined the work force and went to work at the Norfolk Regional Center, doing reality-based groups with the patients of the mental health facility. Linda truly loved her work with the patients and never lost her “heart” for those suffering from mental illness. In 2007 Linda transferred to the Norfolk Veterans Home and spent the remainder of her State of Nebraska career as the Administrative Assistant there. In 2009 Linda met John Heckroot. Not only was John “the love of her life” he became family to Linda’s daughter, and Linda’s many family and friends. Isabella Zoe Heckroot aka Izzie came into their life in 2013 and immediately became “spoiled rotten empty nest doggie”. Linda served many years on the Board of the American Red Cross, as well as chaired the PATCH Health Fair. While living in Meadow Grove she also was a part of many Spring Fling events, community activities and assisted with instigating Bath Tub Races on Meadow Grove’s main street. Linda loved her family and friends. Linda cherished her many groups of girlfriends she was a part of. Linda is survived by her daughter Candace Olson and her husband Dean, granddaughter Dr. Sydney Olson-Greiss and her husband Gary Griess, grandson Maxwell Olson, grandson Paxton Olson, partner John Heckroot, John’s children Shannon Mills and her husband Kenny, Wesley Heckroot and his wife Heather, her dog Izzie, brother in law and wife, Steve and Patti Sparr, sister in law Judy Galyen, their children and all her beloved nieces and nephews, her Greek family in California, a newly found half-brother Mack Voyles, and her former husband Larry Sparr. She was preceded in death by her parents Bob and Peggy, brother in law Roger Galyen and brother in law and wife Lyle and Beverly Sparr. A note from Linda . . . First off – Aloha all! And then -If I were to have written my life story I had the title all picked out . . . I TOLD YOU I WASN’T EXAGERATING! Condolences may be expressed to the family on-line at www.stonacekfuneralchapel.com.

NORFOLK - Celebration of life service for Linda L. Sparr, 72, of Norfolk, will be held at 3:30 p.m., Sunday, June 28, 2020 at the Stonacek Funeral Chapel in Norfolk with Pastor Eric Biehl officiating. Visitation will begin one hour prior to... View Obituary & Service Information

The family of Linda Lee Sparr created this Life Tributes page to make it easy to share your memories.

Send flowers to the Sparr family.