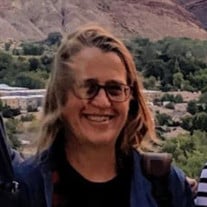 NORFOLK -- Funeral service for Lisa N. Dike, 53, of Norfolk will be held at 10:30 a.m., Saturday, August 29, 2020 at the Stonacek Funeral Chapel in Norfolk with Rev. Leon Rosenthal officiating. Private family inurnment will be held at a later date at Hillcrest Memorial Park Cemetery, Norfolk. Visitation will be 5:00-7:00 p.m., Friday, at the Stonacek Funeral Chapel. Lisa passed away on Wednesday, August 26, 2020 at the Faith Regional Hospital in Norfolk. Stonacek Funeral Chapel in Norfolk is in charge of the arrangements. Lisa was born September 23, 1966 in Norfolk to Walter and Clydine (Tyler) Hilkemann Sr. She attended Pierce public schools and then graduated from Norfolk Public High School. She then received 2 years of education at Northeast Community college and then acquired her Human Resource degree from Bellevue University several years later. She was married to Stanley K. Dike on July 3, 1987 at Christ Lutheran Church, Norfolk. After they were married they started their family together in Lincoln, NE. They kept themselves busy by rounding out their family with four boys before moving back to Norfolk in 1999. Lisa was currently working at the Liberty Center in Norfolk and has been there since 2013. Lisa enjoyed gardening, taking care of her dogs and pets, and spending time with her boys. Lisa was a Cub Scout leader for numerous years and a teacher’s aide at District #20 where she was very influential in their reading program. Survivors include her spouse Stan Dike of Norfolk, and children Alex Dike of Norfolk, Brandon and wife Allison Dike of Lakewood, CO., Adam Dike of Lincoln, and Jared Dike of Omaha, brother-in-law Robert and wife Teresa Dike of Boxelder, SD. She was preceded in death by her parents Walter Sr. and Clydine, and brother Liwei. Condolences may be expressed to the family on-line at www.stonacekfuneralchapel.com.

NORFOLK -- Funeral service for Lisa N. Dike, 53, of Norfolk will be held at 10:30 a.m., Saturday, August 29, 2020 at the Stonacek Funeral Chapel in Norfolk with Rev. Leon Rosenthal officiating. Private family inurnment will be held at a later... View Obituary & Service Information

The family of Lisa N. Dike created this Life Tributes page to make it easy to share your memories.

Send flowers to the Dike family.