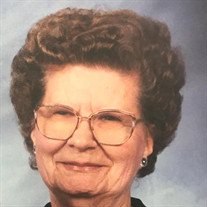 PIERCE -- Funeral service for Lois J. Luebbers, 93, of Pierce will be held at 10:30 a.m., Thursday, August 26, 2021 at Stonacek Memorial Chapel in Pierce. Officiating the service will be Rev. Gordon Bruce. Burial will take place at St. Mary's Catholic Cemetery, Rural Osmond. Visitation will be one hour prior to service time. Lois died on Saturday, August 21, 2021 at the Heritage of Bel-Air Nursing Home in Norfolk. Stonacek Memorial Chapel in Pierce is in charge of the arrangements. Lois was born on March 3, 1928 to Harry and Hattie (Miller) Ziemer in rural Randolph, Nebraska. She was baptized March 11, 1928 at St. John’s Lutheran Church in Randolph. She grew up on a farm north of Pierce and attended school District #18 to the eighth grade. She helped her parents on the family farm and also took care of her mother who was in ill health. In 1960 she moved to Pierce with her parents due to the health of her father. She cared for her parents and did seamstress work from their home. After the death of her parents she worked as a C.N.A at Pierce Manor for 19 years. She married Matt Luebbers December 2, 1983 at St. Mary’s Catholic Church, in Norfolk. After marriage the couple made their home in Pierce. Lois was always willing to help someone that needed help. Lois married Matt Luebbers on December 2, 1983 at the St. Mary’s Catholic Church, in Norfolk. Survivors include her several nieces and nephews on Matt and Lois’s family. She was preceded in death by her parents Harry and Hattie, husband Matt Luebbers died December 26, 2001, brother and sister in law Leslie and Julene Ziemer. Organist will be Shirley Hetrick and soloist will be Duane Christiansen. Duane will be singing “How Great Thou Art”, “On Eagles Wings”, and congregational hymn will be “Be Not Afraid.” Casket bearers will be Eric Acklie, Jeremy Reed, Mike Ziemer, Marlin Zautke, Vernon Zautke, and Roy Zautke. Condolences may be expressed to the family on-line at www.stonacekfuneralchapel.com.

The family of Lois J. Luebbers created this Life Tributes page to make it easy to share your memories.

Send flowers to the Luebbers family.