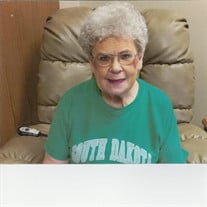 RANDOLPH -- Louise Nina (Remington) Matthies age 76 of Yankton, South Dakota, formerly of Randolph, NE. She passed away Tuesday, September 24, 2019 at Avera Majestic Bluff Nursing Home, Yankton, S.D. Funeral services for Louise will be 10:00 a.m., Monday, September 30, 2019 at St. John's Lutheran Church, Randolph, NE. Officiate will be Reverend Trudy Powell. Interment will be at Hillcrest Memorial Park Cemetery, Norfolk, NE. Visitation for Louise will be from 4:00 to 7:00 p.m., Sunday at St. John's Lutheran Church, Randolph. Arrangements by Stonacek Memorial Chapel, Osmond, NE. Louise Nina (Remington) Matthies was born Jan. 25, 1943, to Richard and Vera (Cunningham) Remington and raised north of Randolph. She was baptized and confirmed at St. John’s Lutheran Church in Randolph. Louise was currently a member of Trinity Lutheran Church in Yankton. Louise graduated from Randolph High School in 1961. After graduation, she went to work cleaning homes and caring for children, after which time she worked at various nursing homes around Randolph. She later moved to Norfolk and continued working there. She met and later married Dale Matthies in Norfolk on Oct. 3, 1988. Louise and Dale worked in Norfolk for some time. After her spouse’s death, she moved to Yankton to work and be near family. She continued cleaning homes and working as nurse aide, as well as doing laundry at a local laundry company. Louise’s favorite job though, was working at The Center in Yankton, cleaning and helping out where needed. Louise loved music and had taken piano lessons at an early age. After getting her first car, she proceeded to take dance lessons. She loved music and her greatest love was country western and good ole rock ‘n’ roll. She loved family dinners and especially family holiday get togethers, loved to go out and eat with friends and family, go shopping with her sister, as well as spending time with her sis. Louise was always eager to share her day’s stories and get any advice she could from her sister. She had learned to knit from her mom at an early age. She was always trying to make something different and as most things Louise had or made, would try to give it away. Louise entered Majestic Nursing Home in Yankton due to health issues. She loved to play bingo and would usually win, so she would save this money and use it to go out and eat with the residents. She also enjoyed getting her hair and nails done and loved to put on her makeup just about every day. She was a spicy gal and had a mind of her own and was always quick to tell you when she didn’t agree with you. Louise is survived by her sister, Linda (Roger) Hora of Yankton; a niece, Sheri (Tom ) Gause of Yankton; a nephew, Todd (Jen) Hora of Sioux Falls, S.D.; three great-nephews, Kirby and Cody Hora and Jax Gause; and a great-niece, Mikala Hora; plus aunts; uncles and cousins. She was preceded in death by her spouse, Dale Matthies, and her parents, Richard and Vera Remington. Music will be provided by organist Marsha Huwaldt with congregation singing “On Eagle’s Wings,” “How Great Thou Art” and “Amazing Grace.” Casket bearers will be Roger Dowling, Jim Cunningham, Dan Blunck, Mike Wortman, Todd Hora and Tom Gause. Honorary pallbearers will be Kirby Hora, Cody Hora, Mikala Hora and Jax Gause. Online condolences may be sent to www.stonacekfuneralchapel.com.

The family of Louise Nina (Remington) Matthies created this Life Tributes page to make it easy to share your memories.

Send flowers to the Matthies family.