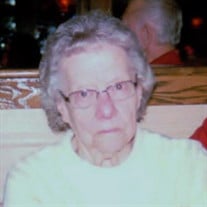 NORFOLK -- PRIVATE family service for Maedean Peters, 92, of Norfolk, will be held on Thursday, November 5, 2020 at Stonacek Funeral Chapel in Norfolk with Reverend Chris Asbury officiating the service. Burial will take place at Clearwater City Cemetery, rural Clearwater. Due to Covid, the family understands if you are unable to attend the service. Maedean died Wednesday, October 28, 2020 at Heritage of Bel Air in Norfolk. Stonacek Funeral Chapel in Norfolk is in charge of the arrangements. Born May 1, 1928, in Clearwater, she was the daughter of Archie and Ruth (Jones) Wolfe. She was baptized and confirmed at Concordia Lutheran Church in Clearwater. She attended grade school in Clearwater and graduated from Clearwater High School in 1945. She married Darrel W. Peters on March 20, 1948, at Concordia Lutheran Church in Clearwater. The couple lived in the Clearwater area, where they raised their family. The family lived in Clearwater until 1968 when they moved to Norfolk. Maedean worked at the Wonder Bread Thrift Store in Norfolk for many years before retiring. Maedean enjoyed knitting, crocheting and crossword puzzles. She was especially thankful for her family and enjoyed spending time with them. She was a member of Grace Lutheran Church in Norfolk. Survivors include her son, Kenneth (Susan) Peters of Pierce; a son, Keith (Denise) Peters of Sugar Hill, Ga.; a daughter, Barbara (Roger) Fritz of Texas; a son-in-law, Bill Peterson of Norton, Kan.; 10 grandchildren and 13 great-grandchildren. She was preceded in death by her spouse, Darrel; her parents, Archie and Ruth Wolfe; her brothers, Glenn “Buster” Wolfe and Larry Wolfe; a sister, Norma Jean Wilcox; and two daughters, Darilyn Peterson and JoAnn Peters. Recorded songs at the service will be “Old Rugged Cross,” “On Eagle’s Wings” and “Amazing Grace.” Casket bearers will be Brandon Peterson, Dustin Peterson, Kent Peters, Brodey Peters, Rob Broekemeier and John Broekemeier. Condolences may be expressed to the family online at www.stonacekfuneral chapel.com.

The family of Maedean Peters created this Life Tributes page to make it easy to share your memories.

Send flowers to the Peters family.