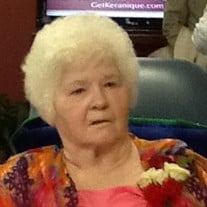 MADISON -- Funeral service for Marcella A. Frauendorfer, 84, formerly of Madison, will be held at 10:30 a.m., Thursday, March 21, 2019 at the St. Leonard's Catholic Church in Madison with Father Gregory Karl officiating. Interment will be in... View Obituary & Service Information

The family of Marcella A. Frauendorfer created this Life Tributes page to make it easy to share your memories.

Send flowers to the Frauendorfer family.