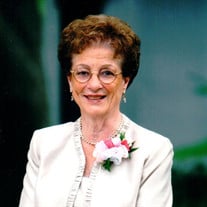 NORFOLK -- Funeral service for Marilyn L. "Mary" Leffers, 90, of Norfolk will be held at 10:00 a.m., Friday, September 25, 2020 at Stonacek Funeral Chapel in Norfolk with Rev. Ray Wilke and Rev. Chris Asbury officiating the service. Burial will take place at Fairview Cemetery, rural Creston. Visitation will start one hour prior to service time on Friday. Marilyn passed away on Sunday, September 20, 2020 at Faith Regional Health Services in Norfolk. Stonacek Funeral Chapel in Norfolk is in charge of the arrangements. Born June 2, 1930, at Creston, Marilyn L. “Mary” Leffers, her twin sister, Patricia, and brother, Ted, were the children of Ted and Lillian Engelbart of Albion. She graduated from Creston High School in 1947. She and twin sister, Pat, in a double ceremony married brothers Elwin “Leff” and Pete Leffers on Aug. 23, 1947, in Vermillion, S.D. Mary and Leff moved to Norfolk in 1951, where Mary will be remembered as an immaculate homemaker and wonderful spouse and mother to children, Dennis and Sandra. After Leff’s retirement from the gas company in 1978, they became part owners with son, Dennis, in the Fireside Lounge in Norfolk. Mary never obtained a driver’s license and accordingly could be seen walking to all her favorite destinations in Norfolk. She will be remembered as the kindest grandmother and great-grandmother in Nebraska. She was also very proud of her waitressing abilities at the Fireside and will be missed by all those who knew her and of her abilities. She was a member of Grace Lutheran Church in Norfolk. Survivors include a son, Dennis (Deanna) Leffers of Littleton, Colo.; a daughter, Sandra (Bruce) Gillette of Irvine, Calif.; a twin sister, Patricia Leffers of Lincoln; five grandchildren and 13 great-grandchildren. She was preceded in death by her spouse, Elwin “Leff” in 1994, and brother Ted W. Engelbart of O’Neill. Recorded music will be “Amazing Grace” and “How Great Thou Art.” Casketbearers will be Jon Gillette, Mike Leffers, Brad Leffers, Bryan Doolittle, Jim Doolittle and Joe Mausbach. Honorary casket bearers will be her great-grandchildren, Hope and Hunter Leffers. Condolences may be expressed to the family online at www.stonacekfuneralchapel.com.

The family of Marilyn L. Leffers created this Life Tributes page to make it easy to share your memories.

Send flowers to the Leffers family.