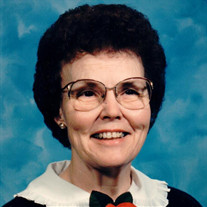 NORFOLK -- Funeral service for Marjorie A. Heusinger, 93, of Norfolk will be held at 10:30 a.m., Tuesday, April 16, 2019 at the Community Bible Church in Norfolk with Rev. Arin Hess officiating. Interment will be at the Hillcrest Memorial Park Cemetery, Norfolk. Visitation will be 4:00-7:00 p.m., Monday, also at the Community Bible Church. Memorials may be made in her memory to the Community Bible Church, 401 E. Park Ave., Norfolk, NE 68701. Stonacek Funeral Chapel in Norfolk is in charge of the arrangements. Marjorie Anne Fleer Heusinger, 93, went to her heavenly home on Thursday, April 11, while at Community Pride Care Center in Battle Creek. She was born to Walter and Anna (Langenberg) Fleer on November 4, 1925, in rural Hoskins. Marjorie was privileged to have parents who taught her to learn, to work, and to play. After schoolwork, milking cows, feeding animals, cultivating corn, cooking and sewing, she cuddled baby animals and played evening games with her father or brother, Walter, Jr. Marjorie graduated from Hoskins High School in 1942, at the age of 16. That fall she began a career that would span the next 70 years of her life, teaching boys and girls. Her first assignments were the one-room schools of District 22 and 41 in Wayne County. From 1947- 1954, she taught at Grant School in Norfolk, and served for a time as president of the Norfolk Public Schools Faculty Club. During the summers she took classes at Wayne State College, graduating with a Bachelor of Arts degree in 1950, and completing requirements for a lifetime teaching certificate in 1959. She married Rev. George Heusinger on June 27, 1954, at the Peace Church outside Norfolk. They were married almost 65 years. She ably assisted her husband as he ministered to three rural congregations each week, the Theophilus Church near Wayne, Immanuel Church near Winside, and the Peace Church. In 1959, they moved into Norfolk and began the Community Bible Church. For close to 60 years, she held a monthly ladies Bible study, directed the Sunday School and Vacation Bible School, baked birthday cakes for senior citizens and others, and counselled women and young people. After moving into Norfolk, Marjorie once again taught in the Norfolk Public Schools, providing classroom relief for 2 or 3 principals each day, as well as substitute teaching. This she did until 1979, when she began teaching kindergarten through second grade at Park Avenue Christian School in Norfolk. After becoming principal, she just taught the kindergarteners. She stopped teaching full-time in 2001, at age 76, but volunteered her time to provide remedial help for students a couple hours each day for 10 more years. She was firm, but gentle, and her students loved her. Marjorie was honored with the Kiwanis Outstanding Elementary Teacher Award, a lifetime membership in the Jefferson PTA, and numerous nominations to Who’s Who in America’s Teachers. Family was very important to her. She rose early every morning to read her Bible and pray for each of her children, and later her grandchildren. At every holiday meal, she would gather the family around so they could hold hands and sing, “God Is So Good.” Then she would serve her specialty recipes that everyone so loved. Afterwards, she thoroughly enjoyed games, laughing, and talking together. She had time and a listening ear for all, from the youngest to the oldest. Marjorie is survived by her husband, George, and their three children, Anne Marie (Arin) Hess of Norfolk, Lynn (Kathleen) Heusinger of Lafayette, Indiana, and Joel (Renee) Heusinger of Lincoln. The Heusingers have 12 grandchildren and 6 great-grandchildren. She was preceded in death by her parents, and her brother, Walter Fleer, Jr. Marjorie was a lover of roses, often taking a bouquet from her garden to friends that were ill or shut-in. She loved her family, but above all, she loved her LORD. It was her joy to share the love of Jesus with each young child that came through her classroom and each friend God brought across her path. “Her children rise up and call her blessed; her husband also, and he praises her. Many women have done virtuously, but you excel them all.” Casket bearers will be Kellen Heusinger, Leighton Heusinger, Logan Heusinger, Jonathan Hess, Luke Hess, Brett Wilson, Dustin Rogers, and Jeremy Caudill. Condolences may be expressed to the family on-line at www.stonacekfuneralchapel.com.

NORFOLK -- Funeral service for Marjorie A. Heusinger, 93, of Norfolk will be held at 10:30 a.m., Tuesday, April 16, 2019 at the Community Bible Church in Norfolk with Rev. Arin Hess officiating. Interment will be at the Hillcrest Memorial Park... View Obituary & Service Information

The family of Marjorie A. Heusinger created this Life Tributes page to make it easy to share your memories.

Send flowers to the Heusinger family.