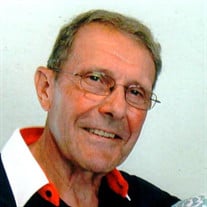 BATTLE CREEK -- Memorial service for Marlin E. Mozer, 76, of Battle Creek will be held at 11:00 a.m., Monday, April 1, 2019 at the Stonacek Funeral Chapel in Norfolk with Rev. Terry Buol officiating. Inurnment will be held at the St. John's Lutheran Cemetery, Battle Creek. Visitation will be held 4:00-7:00 p.m., Sunday, also at the Stonacek Funeral Chapel in Norfolk. Marlin died Thursday, March 28, 2019 at the his residence, rural Battle Creek. Stonacek Funeral Chapel in Norfolk is in charge of the arrangements. Marlin Eldor Mozer was born on March 13, 1943 in Norfolk to J. Fred Mozer and Katherine (Thomsen) Mozer and passed away on Thursday, March 28, 2019 at his home south of Battle Creek surrounded by his family. Marlin grew up on the family farm south of Battle Creek, where he lived his whole life. He attended elementary school at District 51 south of Battle Creek through 4th grade, and then attended St. John’s Lutheran School in Battle Creek until the 8th Grade. He graduated from Battle Creek High School in 1961, participating in football, FFA, and school plays. After High School, he enlisted in the Army Reserves and attended basic training at Fort Leonard Wood, Missouri. Marlin and Gaynold Porath were married on April 8, 1967. Marlin and Gaynold farmed south of Battle Creek on the same land he worked with his father. He quit farming in the early 90’s because of ill health. He worked a variety of jobs including helping to set up the new Wal-Mart super center in Norfolk which led to being a regional manager for the maintenance department in Nebraska and Colorado and helped set up stores in Iowa and Missouri. He worked at Producer’s Hybrid for several years and retired in 2005. Marlin was a lifelong Christian, who was active in Bible Studies and witnessed to co-workers and the youth in Nebraska youth detention centers in Madison and Omaha from 2000 to 2017 when his health prevented him from continuing. Marlin was an avid sports fan, and made it a priority to stay as active as possible. He will forever be remembered for attending sporting events for his four children over the years. He made it known that they were his priority, and if there was a game or a track meet, Marlin would leave his tractor set and work until the middle of the night so he could attend his children’s activities, or coach them. He enjoyed watching his children run, but was also very successful himself; competing in the Cornhusker State Games from the first year they came to Nebraska. Marlin was a member of the United States Judo Federation, and was a Sankyu Brown Belt, 3rd Class. On weekends, he was known to get a group together to play touch football at the park. In later years Marlin and Gaynold enjoyed traveling to visit their children and grandchildren spanning the four time zones of the United States. In the summers he spent countless hours in their gardens knowing he was going to give the majority of produce away. He is survived by his wife of 51 years, Gaynold Mozer, son Greg Mozer of Madisonville, Tennessee; daughter Melanie (Jason) Mathews of Batesville, Arkansas; daughter Stacie (Dennis) Villavicenio of Three Rivers, California; daughter LeAnn (James) Gutzwiller of Eugene, Oregon, and his sister, Mardell Buker of Norfolk, Nebraska; 10 grandchildren, and 1 great-grandchild and numerous nieces and nephews. He was preceded in death by his parents J. Fred and Katherine Mozer, parents-in-law Martin and Naoma Porath, brother and sister-in-law Vic and Arvis Porath. Memorials are suggested to the Norfolk Rescue Mission and the Orphan Grain Train. Condolences may be expressed to the family online at www.stonacekfuneralchapel.com

BATTLE CREEK -- Memorial service for Marlin E. Mozer, 76, of Battle Creek will be held at 11:00 a.m., Monday, April 1, 2019 at the Stonacek Funeral Chapel in Norfolk with Rev. Terry Buol officiating. Inurnment will be held at the St. John's... View Obituary & Service Information

The family of Marlin E. Mozer created this Life Tributes page to make it easy to share your memories.

Send flowers to the Mozer family.